Anna Skusiewicz, Brand Manager, Vodafone Malta this week addressed the press and organizers during the official launch of the Vodafone Malta Marathon 2016.
This is the third year that Vodafone Malta is sponsoring the Malta Marathon. Following the successful and rewarding experience of the past two years, she said that Vodafone, has been eagerly waiting for this year’s edition, and has been working closely with the organising committee to ensure that the 2016 Vodafone Malta Marathon is a memorable one.
An event such as the Malta Marathon is one that Vodafone truly embraces. Whether they run or walk, aim for the full or the half marathon, what defines each and every runner is their enthusiasm and their dedication; their commitment to take time out from their day-to-day lives and routines to stretch themselves to the absolute limit. This is a commitment that Vodafone Malta finds truly inspirational.
Mr Skusiewicz said that Vodafone believes in the power of the individual, and in the power of that individual to achieve any personal aim that he or she aspires to. Their sponsorship of the Malta Marathon is based very much on this belief, since this event represents a life-long goal for so many people who train morning and evening to achieve it.
The Vodafone Malta Marathon continues to grow year from year. This can be seen in the number of registrations which have increased annually and which for the second consecutive year exceeds the four thousand mark. She then outlined the arrangements Vodafone has put in place to add value to the whole Marathon experience, not only for the runners but also for the families and friends supporting them.
Once again this year, in collaboration with Fitness who sponsored the development of the app, Vodafone will once again be offering the Shvoong app to all participants. This facility offers all runners the option of having their photograph taken at all the strategic points along the Marathon route, with these images being uploaded within minutes to the individual’s Facebook timeline.
She added that she is sure that these images will provide a treasured memory for all participants after the event, allowing them to relive the race long after it has passed. It will also allow their family and friends to feel truly connected to the event, since they will be able to follow their progress on a minute-by-minute basis.
Besides these images, this year the app also provides a new feature, where the participants have the option to subscribe to have useful data such as the time elapsed from the start of the race, the distance reached, the runner’s average speed as well as the runner’s actual location visualised on a route map.
Vodafone can offer this facility because, as Malta’s leading mobile operator with the only 4G network that offers full nationwide coverage, it can rely on the excellent speed provided by this network to ensure the fast and effective transfer of such a high volume of data. 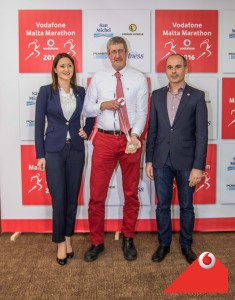 Using this technology to support all those who will be running in the Marathon really sums up how Vodafone views its technology. The company always wants to aim for the best, which is why it is consistently launching so many firsts on the island, not because this is an end in itself, but because it is through this technology that it can empower people to live life to the full and achieve their goals.
Once again this year participants may register for the Marathon at Vodafone Destination Store in Birkirkara, where they can also register for the Shoving app. Vodafone staff will be on hand to assist them in this process and to explain exactly how the app works.
Finally on to the day of the Marathon itself, Vodafone would like to invite people to join the fun and support the runners at the Sliema finish line where it will be distributing free merchandise from the Vodafone stand to cheer and celebrate together with the runners on their great achievement.
She finished by thanking all the official partners Fitness, San Michel, Urban Jungle and Powerade, as well as the Official Organising Committee of the Marathon, in particular Joe Micallef and Antonello Gauci. An event of this scale requires detailed logistics and planning from months in advance and Vodafone has seen first hand the Committee’s commitment to ensuring that this is done as efficiently as possible. It is truly a pleasure for Vodafone to support this tremendous effort, she concluded.