The 70th Annual General Meeting of Simonds Farsons Cisk plc approved a resolution that permits the Board to implement, as it deems necessary or expedient the spin-off of a number of property assets into a separately listed public limited company. The spin-off will be effected by way of a distribution of its shareholding in the Group’s property company, Trident Estates Ltd, to shareholders pro rata to the shares held by them in Simonds Farsons Cisk plc at the time of issue. Trident Estates Ltd intends to file an application with the Listing Authority for admission to listing of its shares on the Malta Stock Exchange.
Farsons Chairman, Mr Louis A Farrugia, explained that over the years, the Group acquired a significant base of real estate. “Although most of our property portfolio is utilised within the Group’s core brewing and beverage operations, a number of property interests offer scope for re-development. As previously announced, our Board believes it would therefore be advantageous to separate a portion of the Group’s property portfolio into a new structure.” 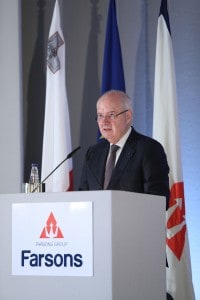 Mr Farrugia said: “Our Board commissioned the revaluation of the properties forming part of the spin-off by a firm of professional architects to reflect current market values. This revaluation resulted in a surplus net of deferred tax of €4.6 million, credited to reserves, and €0.4 million included in the profit for the year.”
During the meeting, the company also gave an account of the satisfactory results for the financial year ending 31 January 2017. During the last five years, the market capitalisation of Farsons Group has increased significantly.
Mr Farrugia explained that a positive year-on-year performance has enabled Farsons to pursue an aggressive capital expenditure programme, including the recently inaugurated €27 million Beer Packaging Facility, and several other projects. The Board is also evaluating the current debt structure for the group including the possibility to redeem the existing Bonds and issue new Bonds over the coming months. 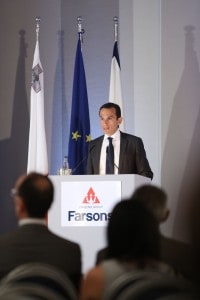 In reviewing the performance of the Group’s business and brands, Farsons Group Chief Executive Mr Norman Aquilina said: “The Group registered a record profit for the year of €12 million, exceeding last year’s record performance by 8%.
“Whilst continuing to seek growth opportunities in our domestic market, we will maintain a strong focus on innovating and internationalising our business further to realise our aspirations of becoming a regional brewery,” said Mr Aquilina.
“Throughout the year, management has continued to drive forward measures which further improved productivity and overall efficiency, with highly trained employees and superior quality standards. These ongoing initiatives have also led Farsons to win more awards for its beers in Brussels and Australia in recent months,” said Mr Aquilina.
During the meeting, both Dr Max Ganado and Mr Roderick Chalmers were uncontested and re-appointed as Directors. All the other resolutions proposed at the Annual General Meeting were approved.

The Annual General Meeting approved the Board’s recommendation of a final dividend of €2.4 million, bringing the total declared dividend for the year to €3.4 million.