You are here: Home » Sunday Opinion » The psychology behind mass behaviour 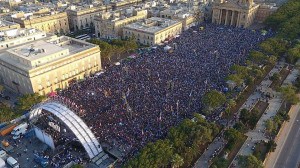 The sea of red which flocked to the Triton Fountain square on 1 May was met by the usual derogatory comments by those who dismissed the crowds for being brainwashed Joseph-lovers who follow him around like a flock of sheep, refusing to take heed of the slightest criticism against him.

The only flaw with that argument is that, using the same yardstick, you would have to apply it to any political leader from any party, past or present. For if one is going to scoff at one mass gathering and deriding those who show up as ‘sheep’ who have come to pay homage to the leader, then one has to scoff at all of them. Granted, Eddie and Gonzi’s premierships were not overshadowed by such corruption scandals (there did not seem to be a lot of investigative journalism being carried out during their time in office), but there was still a lot of OTT hero worship going on. Not a word of criticism was tolerated by those who supported them either. Mintoff, of course, was considered a god. Personally, I have never been comfortable with any of this, but I guess even idolatry is in the eyes of the beholder.

We have lived through seas of red and blue all our lives, with adulation towards il-kap or il-mexxej, depending on which party you support. As we have seen, scandals and questionable behaviour hardly ever seem to water the numbers down.

The Maltese have always gauged the popularity and strength of their party from the turnout at mass meetings, and no matter how much social media may have taken over when it comes to canvassing and election campaigns, the physical crowd-pulling power of a political leader still trumps any amount of Facebook likes or shares.

In fact, a comment I saw recently, during a discussion about how we seem to be between a rock and a hard place when it comes to our choices at election time, seemed to sum it all up: “well, what are we going to vote for instead, a Facebook page?”

However, mass meetings also have to be taken in context: the one on Tuesday took place against some of the most serious accusations ever levied at a Prime Minister that I can remember. And while calling for his supporters to “give a reply” to the continuous, unrelenting allegations by showing up in their droves may have struck a chord within the hearts of fervent party faithfuls, Muscat’s decision to turn International Workers’ Day into an ego-stroking exercise, did not go down too well with those who are on the sidelines and are not impressed by this type of showmanship.

As many have already pointed out, a huge turnout will not make those allegations go away. In fact, nothing will ever completely exonerate Muscat until the inquiries are concluded, which means that the only thing most people have to go on for now is their gut instinct. It is this which I always find so interesting about the way different people react to political leaders depending on various factors, including their ingrained political leanings and probably a lifetime of social conditioning and prejudice. One person can look at Muscat and all they see is a smirking, completely fake persona who can sell snow to the Eskimos. The fact that he has not sacked Keith and Konrad means “he is in on it as well”, and nothing will convince them otherwise.

Others look at the Prime Minister and see the greatest thing since sliced bread (or to be more precise, since their other hero, Mintoff). As for the Panama Papers, they might as well have happened on the moon, because they simply do not care. These are the people who showed up to demonstrate their support, feeling a sense of kinship with fellow supporters which is at the crux of such mass behaviour, where you feel a profound sense of belonging with others who share your views. This is the psychological role which these mass meetings play.

The vox pop carried out by this paper with those attending the 1 May meeting was especially intriguing. It was obvious that when questioned they would staunchly defend Muscat’s actions (Labour supporters who have been completely disillusioned by him were hardly going to attend). But the more superlative adjectives I heard being showered on the Prime Minister, the more I realized that the fierce loyalty being shown ran deep for other, more complicated reasons than the usual, predictable tribalism.

After 25 years in the wilderness of the Opposition, these diehard supporters are not going to just sit there and let the man who took PL to two landslide electoral victories in a row be torn down. So while the PN tries to denigrate all those who support Labour for not having a moral compass, I think that it is too facile an explanation. Let us not forget that for decades PL supporters had to put up with the PN trying to beat down down as if they were dirt, as if nothing the Labour party could do would be good enough and that the PN was the only, natural, party capable of leading the country.

Since 2013, however, as the party in government, the PL has proved this belief to be completely unfounded, giving its supporters a measure of pride and self-confidence in the fact that, not only is the country doing well, but that it has surpassed all expectations. (Of course, this has come at a huge price which cannot be overlooked: rampant over-development, destruction of the environment, accusations of ‘dirty’ money being laundered and a pervasive culture of greed). But after so many years of being taunted that a Labour government would grind the country economically to the ground, what I could see in the faces of those who were interviewed was a fierce pride that, on the contrary, a Labour government (“their” government) has been very successful indeed.

From what I could tell, the people who were interviewed are just ordinary folk who, no matter who runs Malta, will still have to wake up every morning and go to work. They are not the ones with their snouts in the trough, guzzling up all the various high-paying jobs either – so it always makes me wonder, why does it not bother them that they have their nose to the grindstone while others are living the life of Riley? Why doesn’t it bother them that PEPs were trying to hide their money, evade tax, and perhaps even worse, while they have to declare every red cent? That is something I still struggle (and consistently fail) to understand.

On the other hand, it also has to be said that the issues which people care about do not always centre around money. To quote columnist Raphael Vassallo: “the ‘economic prosperity’ argument fails to take into account the policy vision in the background. It overlooks the fact that, for everyone else out there, life goes on: infertile couples still can’t have children; minorities still want equal rights; and above all, people in general still want to live in a country that is politically stable, and which has a clear idea of where it wants to go.” That too, would explain why, no matter how many arrows are slung at Muscat from all directions, they seem to fall ineffectively to the ground without ever really penetrating his formidable armour of widespread popular support.

It is also not lost on the average voter that, on the other side of the fence, the prospects are looking bleaker every week. After all, even the effectiveness of a demonstration is measured according to how many attend, as we could see during the Call for Truth and Justice demo held last Sunday. Clearly worried about a low turnout, an open call was made to “everyone…including political parties”, and this was quickly taken up by the PN led by Adrian Delia who was joined by his many supporters, much to the dismay of those who did not want him there at all. The next few days resulted in very public, open warfare on FB between the two factions, with no one even bothering to hide the fact that PN supporters have splintered into two, very distinct groups of ‘us’ and ‘them’.

To quote Martin Scicluna’s excellent analysis this week, one group is made up of: “a few thousand mainly disaffected Nationalists representing a certain strata of Maltese society…They feel entitled by birth and social status to ensure that the Nationalists are led by ‘one of us’.”

The other group is made up of anyone else who happens to support Adrian Delia, whose entire leadership has been tainted because he too seems to be carrying a lot of dubious baggage. While his presence rankled with those who feel he should never have been made leader in the first place, having Delia there meant the numbers were swelled more than usual, and his supporters were very quick to rub this in the face of his critics. What ensued was a cyber bloodbath in which the hostility jumped off the screen and lines were clearly drawn as never before, leading Adrian Delia to throw down the gauntlet: “those who do not want to see the party progress have an obvious decision to take”.

Whether those dissenters within the party will take up his challenge or not, remains to be seen.