When I first saw the attached photo, I was completely taken aback by the implications of the way the articles by two fellow Sunday op-ed columnists, Claire Bonello and Michela Spiteri, had been scrawled over, with a thick black felt tip marker.

There was anger in that thick scrawl which almost seemed to jab through the page even though it was done electronically. But as I looked at it more closely, it spoke of much more than that: there was hatred too, because I could see that the bylines had been deliberately crossed out and the photos had been spitefully defaced. Usually it is posters or public places which are vandalized by graffiti as some form of imagined or real protest, here the ‘vandalism’ was inexplicably directed against two writers. It was also a childish act, something you would expect from a 12-year-old. In fact, I am surprised that the person who did it did not draw a mustache on their faces as well.

So, who, you might wonder, would do such a thing? Well, it was none other than Andrew Borg Cardona, a grown man, not an adolescent, who is not only a lawyer but a political commentator as well who, for a while, also had his own column. He shared the image on his Facebook page, where it got a number of likes from those who obviously agree with him. The more I Iooked at that image, the more I found it disturbing in its malice – the man clearly has some issues. 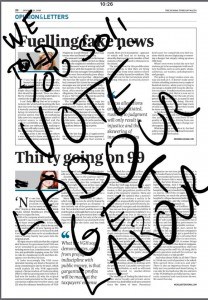 Now Dr Borg Cardona may have all sorts of reasons for personally disliking and disagreeing with the two women in question, but the fact that he felt this gripping need to display his very strong feelings so prominently and publicly is telling. I would have thought that someone like him is capable of rebutting arguments in a rational, mature way, without resorting to such puerile tactics. After all, neither of these two women are politicians (who are usually fair game for this type of thing) and in an atmosphere where we are continuously being told about the importance of the Fourth Estate, and how freedom of expression should never be shackled or trodden upon in any way, why was he so maliciously targetting these two opinion columnists? And why was he encouraging and goading others to treat them in the same way (which is the only reason he shared it on FB)?

More significantly, why does he have all this hate towards women? We have already had a taste of how he feels about the opposite sex in his now infamous Tweet about Ira Losco when she was taking part in the Eurovision song contest, “Can you imagine the feel good factor if the bitch wins?”. Now he seems to have turned his guns on Dr Bonello and Dr Spiteri. For, let’s be clear, the very act of defacing someone’s photo is exactly that; a hateful, dehumanizing gesture which seeks to obliterate the woman’s importance, and her very existence. As I had written when Tony Zarb made those sexist remarks about the Occupy Justice women (likening them to prostitutes), some people cannot seem to handle opinionated women and try to shut them down by insulting and belittling them. In Borg Cardona’s case, he seems to be trying to wipe them out completely, if only on paper. (In fact, he later posted an article by Martin Scicluna and criticized it but did not give the same defacing treatment to the author’s photo, his name or the contents of the article.)

Which brings me to my next point. What surprised me the most, in fact, about the columnists’ faces and names being blacked out is that there was not a peep from the usual outraged quarters, who are always so ready to pounce when a Labour dinosaur comes out with some misogynist remark. In fact, I waited and waited to see if any of the women’s groups would protest in anger…but nothing, zilch, nada. When it comes to what is objectionable behaviour towards women in the public eye I think some real consistency would be very welcome. You are either always against sexism no matter where it originates from, or are you going to delicately pick and choose, after first gauging if the woman being targetted is on the same ‘side’ as yourself. But that is not how it is meant to work, is it? Either we all have a right to say what we like without being dehumanized and harassed, or else only those who tally with your own agenda are going to be assured of your very vocal backing and support. Borg Cardona placed a metaphorical gag on these columnists with his scribbles, but none of the self-proclaimed female warriors seemed to be unduly upset or bothered enough to call him out on it. It is pretty silly and pointless to spout feminist theory unless you really mean it, otherwise what we are really looking at here is not only a growing culture of misogynist men but also (and equally counter-productive) a growing band of faux feminists who only take over social media with their indignation and calls for petitions, when it suits them.

Finally, of course, I have to comment on the words themselves which were scrawled cross the two articles, “Vote Labour, Get Labour”. What Dr Borg Cardona and probably all those who clicked “like” on his little attempt at humour consistently fail to grasp, is that these are two op-ed columnists who have built a very good reputation and a wide readership over the years, precisely because they have credibility and are capable of analyzing the political scenario intelligently and dispassionately. This immature attempt to try and discredit them is certainly not the first of its kind, but it simply reinforces one of the many reasons why the Nationalist Party has failed to connect with so much of the electorate. It is time such PN activists realise that the majority of the country is sick to the back teeth of constantly pigeon-holing others as ‘red’ or ‘blue’, and basing one’s like or dislike of people purely on how they vote (or how they are perceived to have voted). It is precisely this general ennui at the constant divisiveness and tribal hatred which has led to so many not really caring any more about politics, or even who is in Government any more, as long as they live a peaceful life.

That is very bad news for the PN, of course, because their mission should be to get people to care enough to want to have a change of Government by offering something better. That will never happen, however, as long as hatred, spite and nastiness continue to be encouraged by people like Andrew Borg Cardona.