You are here: Home » Sunday Opinion » That could never happen here – or could it?

We often read about horrible abuse, neglect and psychotic behaviour inflicted by parents on their children in other countries, and “console’ ourselves that something so appalling could never, ever happen here. We are not like that, “we” are different.

The latest story emerging from California is a case in point. It is straight out of an episode of Criminal Minds: 13 siblings, ranging in age from 2 – 29 were found shackled and chained to their beds and in an emaciated state. They had been subjected to years of physical abuse and torture by their own parents, Louise and David Turpin. They were only discovered because one of the children, aged 17, had managed to escape and call the Police after plotting the escape with her brothers and sisters for over two years.

According to prosecutors, “The brothers and sisters were subject to repeated beatings, including strangulation, and were punished by being chained up, often for weeks or months at a time. The victims weren’t released from their chains even to go to the bathroom and were only allowed to shower once a year.”

Other reports state that, “The dozen oldest children were so severely malnourished they faced muscle-wasting…and have suffered cognitive impairment and nerve damage as a result of ‘extreme and prolonged physical abuse.’ One of the children, at age 12, is the weight of an average 7-year-old…The 29-year-old female victim weighs 82 pounds.” 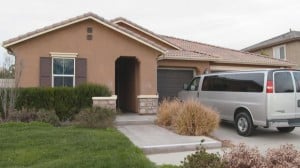 The most obvious question which springs to mind is, how did no one notice? How did no one, in what looked like a normal suburban neighbourhood, detect that this gaggle of children never appeared outside, that the young ones never went to school, and the older ones never went out to work or socialise? It seems mind-boggling.

Perhaps one clue as to how this family managed to be so isolated from the outside world is that the Turpin couple were estranged from their other relatives, who had tried to remain in contact to no avail. In fact, the Turpins had moved from Texas to California, severing all ties. According to ABC news. “On the few occasions (neighbours) saw any of the children, they answered in unison, in a monotone and robotic way. Multiple neighbours said they only saw the children when they would pile in their family van late at night. They would also only return late at night.”

Another neighbour said the one time she tried to talk to three of the children, they simply froze and did not respond. She has since learned that the “children” whom she thought were around 12 years old, were actually the severely malnourished adult children.

Among the questions surrounding this very bizarre case is, how come no child protection services had ever been called to the house? Another question is how, after declaring bankruptcy in 2011 because of credit card debts, did the Turpins still manage to go on vacation with all the children as recently as 2105? The photos posted on Facebook show them looking healthy and smiling.

At the time of writing, it is not yet clear what led the Turpin couple to behave as they did, although the probability is that mental health issues were involved. The fact that the couple kept having so many children when they clearly could not cope, and the likelihood of the mother suffering from post-natal depression, is another possible factor. But as details continue to emerge, it is inevitable for comparisons to be made and to ask ourselves whether something as horrific as this could actually happen here. Is it possible for such abuse to go undetected and for neighbours not to suspect a thing? Up to perhaps ten years ago I would have said, “not likely”, but these days, I am not so sure. Of course, this does not mean that there are necessarily families who would neglect and abuse their children to this appalling extreme, but sometimes it takes many long years for such stories to be revealed.

One story which immediately comes to mind, came to light in 2002 in Gozo, where a cruel, sadistic father terrorized his wife and children for over 30 years, until one day, the oldest son shot him in self-defense. The domestic violence cases we keep hearing about, where the abuse is directed against the wife rather than the children, also tend to come out into the open only after it has been going on for a long time. The victim by then would have been so conditioned that she becomes submissive out of sheer terror, which also explains the number of cases we are seeing where the woman files a police report only to retract her testimony. At times, she might also retract because her psyche is too damaged to believe she is worth any better than this, so she goes back to the only life she knows.

When it comes to children, we used to pride ourselves that “we Maltese absolutely adore our kids”, but as Malta’s social fabric and outlook have changed, we can no longer be so sure-footed about what might have been taken for granted in the past. By this, I am not referring to non-Maltese nationals coming to live here who (some claim) have “changed us”, but the fact that many Maltese people have themselves gone through a process of change when it comes to family ties, the raising of children, and the obligations and duties which come with it.

There are many reasons for this, one of which I would say is a more self-centered approach to life in general. In some cases, this selfish attitude does not go away once children are brought into the world, but persists and sometimes even grows, as the tiny, helpless child is seen as making more and more demands on a parent who, up until becoming a parent, was used to living life as he/she pleases and to hell with the consequences. Having one or more children around who are constantly wanting something, and who are preventing them from living their previous carefree life, is more than they can take, and parenthood suddenly becomes a suffocating trap.

Not every case of negligence is always deliberate, of course, because there are situations where life’s problems may throw parents into a vortex of emotions not of their own making, while struggling to raise their children in a semblance of normalcy. As more people go through marital separation, move house, change neighbourhoods and sometimes even lose their former family support system, it is also very likely that a sense of alienation and isolation sets in. Then there are cases of separated parents, who go on to have a new set of children with different partners, who have to be especially careful that their first set of children whom they had with their ex, do not end up (even unintentionally) discarded and ignored.

A recent report stated that there are 267 minors who have been placed under a care protection order, which I think is quite a high number for such a small country, and points to over 500 parents who brought kids into the world and yet have been completely derelict in their primary duty to protect their own offspring. I also found it rather depressing to learn from these statistics, that only 12 children were being raised by their relatives; this in a country which has always styled itself as having a very strong, family network.

So, while hopefully in Malta we will never comes across anything remotely similar to what has become known as the ‘California captivity case’, there still needs to be more vigilance, especially when it comes to children. To quote one of the neighbours who occasionally saw some of the children, “we had no idea what they were enduring. We were all like a part of their nightmare. We had no idea what was happening behind closed doors.”