A concert of modern music is being held on Saturday, 10 December, at 8 pm at the Manoel Theatre. Most of the works in this programme were composed specifically for this event, while others are being performed for the first time in Malta.

Crossing Lines is a unique project featuring a concert that is to be recorded live to be rebroadcast both locally and internationally later. The Malta Philharmonic Orchestra is being conducted by Mro Brian Schembri with Mro Nazareno Ferruggio from Bari as solo pianist. Composer Mariella Cassar (pictured below)  is the producer. 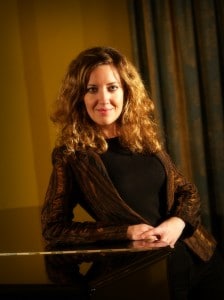 Musicians and composers from different parts of Europe, Russia and the United States, are being brought together to work as a team on this high-quality project for which five rehearsals are being held here. It aims to offer a new musical genre to the Maltese public in a welcoming way, resulting in an enjoyable, yet distinct evening. The event aims to portray music composition as an artistic medium, which can be expressed and exposed in various ways.

An experimental piece in three movements, 4’33” by American composer John Cage, in which the score instructs the performer not to play the instrument for the entire duration, follows the piece How Great, How Fall’n by British composer Christopher Best in the second part of the programme.

The recording of the concert by Citadel Video Communications Ltd will ensure a wider international audience on TV and other media. The concert is targeted at a wide range of people, including youths and mature people. A Toi Toi talk precedes the performance.