HSBC Bank Malta hosted one of the world’s leading foreign exchange strategists, David Bloom, to provide his unrivalled insights on the changing face of global trade driven by currency pricing. A packed hall of business and corporate customers learned about the current wave of synchronised global growth, the USD dynamics as well as the ongoing EU-Brexit debate.
Apart from receiving David Bloom’s perspectives on global trade and FX, the audience benefited also from an analysis of the local economy by economist Dr Gordon Cordina, who provided a number of key insights into the current performance and future outlook of the Maltese economy.
Guests were welcomed by the bank’s CEO Andrew Beane, who reiterated HSBC’s capability to bring the latest and best knowledge resources for the benefit of Maltese businesses and the economy as part of HSBC’s commitment to grow its corporate banking business in Malta.
David Bloom, Global Head of FX at HSBC Global Research, renowned for his gripping candour on everywhere from Bloomberg to CNBC, picked up on a recent HSBC research article “Synchronised global sinking” which questioned that while the world celebrates an unprecedented global growth, from an economist’s perspective the dilemma is whether this is actually an end.
“It’s actually an end because what happens is that when you get synchronised global growth pressure starts to rise like high oil prices, high commodity prices, it squeezes on the economy, and things get more difficult because we are all fighting for the same things,” he said.
If the momentum of the ongoing synchronised global growth stutters, he asked, how will those central banks behave when they did not raise interest rates in the case of an economic downturn, such as Sweden, Switzerland, the eurozone, and Japan? Furthermore, will the currencies weaken a lot because they do not have the ability to cut interest rates? he asked. 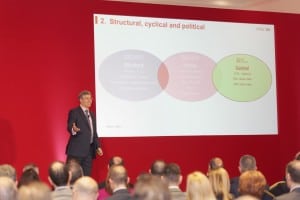 Explaining how currencies are evaluated, David Bloom said whether it is bonds or FX or financial markets, one needs to look at three aspects: structural, cyclical, and the political. “The structural is often the country’s account, the debt-to-GDP, the debt dynamics, the current accounts, whilst the cyclical is the day-to-day movement of industrial production, retail sales, the economic health, and employment numbers.
“The third aspect is political. Politics is playing a greater role in financial markets than it used to and its impact on prices is becoming extreme,” said David Bloom.
In light of the three aspects, David Bloom maintained that on cyclicality, the USD is doing ‘fantastically well’ with the US economy expanding and this is causing the Federal Reserve Bank to continue to raise interest rates.

“So which force is the strongest? It seems as though the cyclical force is now winning, thereby propelling the USD higher.” He then added that in the case of sterling, cyclically the economy is slowing down, the political worry of Brexit hangs over the country, and structurally the United Kingdom has a big current account deficit. This paints a poor picture for the UK pound.
The analyst also highlighted the big puzzle in economics at the moment: why are unemployment rates so low yet there is no wage pressure?
“This idea is what the academics call the ‘Philip’s curve’, which means low unemployment rates puts upward pressure on wages and thereby creates inflation. That wage pressure doesn’t stop until unemployment start to rise again and unemployment only rises when the economy slows down. But this time, in this cycle, in the current world, be it the US, the UK, and looking globally, unemployment rates are falling but wages are just not rising,” he explained.
On Malta, David Bloom noted the structural improvements in the public debt-to-GDP ratio, debt levels and the external current account. Following Bloom’s presentation, economist Dr Gordon Cordina remarked that these improvements are taking place within the context of economic growth that is unprecedented in recent times, and stronger than that of most EU countries.
He turned next to address the question of the sustainability of such growth, to conclude that the future outcome will very much depend on the extent to which the Maltese economy will be able to offer an attractive lifestyle and at the same time an economically competitive proposition to develop as a regional hub for business, tourism niches, and higher value added services and manufacturing activities.
In developing this analysis, Dr Cordina emphasised that for economic growth to result in development, it needs to be sustainable into the future and resilient to risks. He also reflected on the importance for an economic structure which would be able to withstand the effects of a temporary slowdown in activity.
“A number of data points appear to sustain the economic sustainability hypothesis for Malta, including the reduction in debt-to-GDP ratios, the increase in productive investment, the rate of job creation and the pattern of sectorial economic diversification,” said Dr Cordina.
There are however risks to the future evolution of the economy, he added, potentially arising from difficulties in managing a rapid influx of migrants, the dependence on sectors which may be prone to external shocks, and the carrying capacity of the economy from the perspectives of the infrastructure and environmental resources.

In concluding, Dr Cordina advocated that the economic dividends of the current growth phase need to be directed towards investments in lifestyle, environmental and infrastructural amenities as well as in business competitiveness. This is indispensable to ensure the continued success of the Maltese economy and avert the effects of potential threats, he said.
At the end of the event, both speakers were asked a number of questions. HSBC Malta Commercial Banking Head Michel Cordina thanked the audience and said: “Bringing international expertise within the HSBC Group to Malta and to your businesses to support your growth is unique to HSBC Malta. In 2018, we will be reconnecting even more with our customers and aim to offer an excellent customer experience.”