You are here: Home » Education » “Break the link between economic growth and waste generation” says GreenPak

Increase in waste generation because of economic growth is assumed to be an indispensable relationship. Not so says GreenPak: sustainable waste practices are the way forward.

Over the past decades, the amount of solid waste in Malta has grown alongside the growth in Gross Domestic Product (GDP). This linkage needs to be broken and the quantities of waste generated by increased commercial activity needs to be decoupled from the growth in GDP. The ‘Sustainable Practices Award’ introduced last night during GreenPak Annual Awards 2016 ceremony, promotes this forward-looking concept. Birkirkara won this new award having registered the most sustainable waste practices for 2015.

The quantity of waste collected from Birkirkara in the black bags decreased by an impressive 37%. At the same time, waste packaging recycling in this locality increased to 45kg per capita last year. This was announced by GreenPak’s Coop Society CEO Ing Mario Schembri during GreenPak’s Annual Awards ceremony, held at the Garden of Serenity in Santa Lucia.

The prestigious award for ‘Best Overall Performance’ was presented to the community of Sliema. This award is presented to the community that registers the highest amount of waste recyclables collected. In 2015, Sliema registered a 65% increase in the collections of recyclable waste. Mosta won the ‘Most Responsive Community Award’ for registering a sustained increase of 30% recycling following a two-month educational campaign run by GreenPak in January 2015.

The Ħal Balzan Local Council scooped the ‘Most Supportive Locality’ award for the Council’s continued commitment in mobilizing its residential and business community to recycle more. The ‘Most Glass Collected Award’ went to the community of Żurrieq. 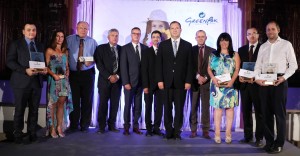 In 2015, the environmental NGO Nature Trust Malta and GreenPak led a campaign to promote the protection of Malta’s wildlife through the recycling of used clothes. In recognition to this collaboration, Mr. Vince Attrad, CEO of Nature Trust, presented a special award to Qrendi Local Council after its residents were judged to have participated mostly in the used clothes campaign in aid of Nature Trust’s Wildlife Rescue Unit.

“The stiff competition between localities to win these prestigious awards offers hope for the future”, said Ing. Schembri. “The GreenPak Local Council Awards has become the environmental premier event of the year in the local government calendar. As the leading national waste recovery scheme, covering more than 70% of Malta’s population, GreenPak constantly seeks to improve Malta’s waste management and to provide the community with efficient services. These awards serve to showcase the achievements of the Maltese public for their commitment towards a better environment”.

Present for the ceremony was the Parliamentary Secretary for Local Government Dr Stefan Buontempo, who congratulated the local council mayors, councillors and executive secretaries, and urged them to lead the community by example in civic duty. Mr Joseph Caruana, permanent secretary on behalf of the Minister for Sustainable Development, the Environment and Climate Change José Herrera who could not attend due to government business abroad, continued to build on the positive messages and encouraged the local councils to keep waste recycling and the environment on top of their agendas.

Besides receiving the trophy and certificate of achievement, the winning local councils were presented with the prize money of €1,000 to support ongoing environmental projects within their respective locality for the benefit of its residents.

GreenPak, a MEPA authorised scheme, is the largest waste recovery scheme in Malta. The organisation is a founding member of EXPRA, a not-for-profit international organisation promoting the concept that it is industry itself that should take up recycling and let recycling be a burden on Government or Local Authorities. GreenPak has for the past decade been one of 35 national producer responsibility systems operating under the PRO Europe umbrella.