You are here: Home » Volunteers » Turn your plastic caps into funds for l-Istrina

Collecting plastic caps of bottled water, soft drinks, jerry cans, detergent bottles and other plastic tops is a relatively easy way how one can generate more money for l-Istrina 2017. The plastic caps collected can be dropped off at the nearest school or where the ‘Nirriċikla għall-Istrina’ sticker is displayed at establishments in one’s respective locality.

This was stated by the President of the GreenPak Coop Mr Victor Galea during the launch of its yearly successful campaign ‘Nirriċikla għall-Istrina 2017’. He said: “In 2011, GreenPak Coop Society started an innovative educational campaign, encouraging school children to collect plastic caps for recycling. Today this initiative became a nationwide programme, a testimony that the public takes action to recycling correctly and at the same time help to turn caps into funds for charity.”

During last year’s l-Istrina, GreenPak presented a cheque of €20,000 to the Malta Community Chest Fund Foundation. Almost 43 tonnes, which is equivalent to over 14 million bottle plastic caps, were collected for recycling in 2016. These were collected from 144 schools, and 52 other entities including scout groups, social organisations, clubs, companies and Local Councils.

In addition, the St Benedict College Ħal Għaxaq Primary School has also received an official certificate from the Malta Records organisation in recognition for collecting the highest total amount of plastic caps for 5 consecutive years. In total, over the past five years, the students managed to collect 9,414 kg of plastic caps. GreenPak also received a certificate from Malta Records in recognition for collecting the largest amount of plastic caps ever collected from the Maltese Islands. 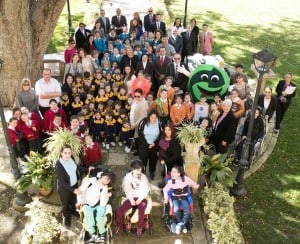 The President of Malta, Marie Louise Coleiro Preca praised GreenPak’s yearly initiative which drives more recycling of plastics, helps to protect the environment, and at the same time raises funds for the Malta Community Chest Fund Foundation. She also presented a certificate to the BOV Centre and to the Żurrieq Local Council for collecting the highest amount of plastic caps in last year’s campaign, from amongst the registered companies and Local Councils, respectively.

“Today is a celebration involving our children and our young people at schools. It is a strong statement of what is happening in our society where children and young people are much more aware of the environment. They feel the need of being active and not passive, in order to help the environment and not let it deteriorate. It is also a statement that this initiative, part of which is new, is no longer associated with schools only, but also associated with the industry. This means that if the industry fully participates, from an environmental point of view it would be truly effective for the benefit of our environment. I would like to strengthen this synergy, so that altogether we take care of our environment effectively, and through this initiative we help those in need,” said the President Marie-Louise Coleiro Preca.