Raphael Sammut from De La Salle College is the winner of this year’s English-Speaking Union of Malta Public Speaking Competition, with the runners-up being Seif Abdelkader from Verdala International School and Gian Francesco Peralta from De La Salle College.
Eighteen students attending Sixth Form and the University of Malta took to the stage at the Chamber of Commerce, Enterprise and Industry in Valletta on 12 March to take part in this competition. The ultimate prize is to represent Malta at the International Public Speaking Competition in London in May.
The other sixth forms represented were St Aloysius College, St Martin’s College, G.F. Abela Junior College and St Edward’s College. Each were given five minutes each to speak on the theme, chosen by ESU London: ‘Integrity has no need of rules’.
Education Minister Evarist Bartolo gave the students five tips on how to be better public speakers, affirming that mistakes are very important so long as we learn from them. Among these tips was to focus on a speech that sounds well when you speak it aloud and not something read from a prepared text; brevity even in terms of the speed of speech; being concrete not abstract, giving examples; know your audience and reach out; and use an optimistic tone.
He urged the students to read a lot of literature, like Hemingway, to be true to themselves and not to try to impress using big words. 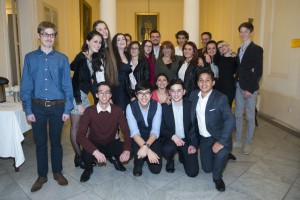 ESU chairman said the International Public Speaking Competition is a flagship programme of the ESU Union globally, involving participants from over 50 countries. Each year, delegates spend a week in London enjoying cultural activities, and speech and debate training from ESU mentors. “It is, I assure you, a life-changing experience, as last year’s winner, Rebecca Bonello Ghio, and all former local winners will attest,” he said.
The judging panel, headed by Dr James Corby, senior lecturer and head of the Department of English at the University of Malta, consisted of two other University lecturers, Dr Brenda Murphy and Dr Colette Sciberras.
ESU Malta Director of Education Pia Zammit, who led the Public Speaking Academy in January, with the participation of a record 46 students from all seven local Sixth Forms, stressed the benefit gained through the improvement the students made in self-confidence and the techniques of public speaking they put into practice.
She thanked Philip Leone Ganado, who assisted with the training and gave the students feedback on their speeches, the judges, the Chamber of Commerce for hosting the event and Teatru Manoel for hosting the individual training.
Before announcing the winners, Dr Corby stressed the importance of admitting that thinking is part of the process of public speaking – demonstrating thinking in action.
The event was attended by guests and members of the English Speaking Union.