You are here: Home » Events » Science in the City 2018: The Power of Science and Culture

Science in the City—European Researchers’ Night has unveiled its 2018 programme. This year it presents many of Malta’s leading scientists, artists and influential thinkers – bringing science and the arts to life in creative ways on Friday 28th September after 6pm, in Valletta.

The event celebrates science and culture with an original programme  that includes theatre, dance, film, workshops, debate and interactive installations, innovators, scientists-in-the-making, and families, that transform the city and bring some of the world’s leading scientists in direct contact with the broader public.

In a press conference to launch the festival’s campaign, Professor Alex Felice, Coordinator of the European Union’s funded project, stressed the importance and privilege of bringing science to a large audience. “We bring together those people pushing the frontiers of discovery, so they can discuss the most important issues we face today and tomorrow; our culture and future.”

With Valletta being European Capital of Culture, Science in the City is collaborating closely with Valletta 2018 Foundation to give the participants a unique experience. Artists and scientists from the University of Applied Arts, Vienna and University of Malta have joined forces to create three interactive installations in the activity Of Mice, Carbon and Tritons.

“This initiative stays true to the objective of the European Capital of Culture to promote collaboration across geographical borders, across disciplines, across the traditional roles of artist and audience; working towards a legacy that lives beyond the end of 2018,” said Valletta 2018 Programming Coordinator Joanne Attard Mallia.

Wilfred Kenely Chief Executive Officer of the University of Malta Research Trust (RIDT), said: “Science in the City plays a major role in promoting the University’s scientific research. The event, is a collaborative effort between researchers, academics, students and performers who, together provide an annual evening of fun and creative learning for people from all backgrounds”.

Speaking about the festival’s theme, ‘Science is Culture’ and outlining over 30 festival activities, Dr Edward Duca, the Festival’s Manager said: “ Science in the City 2018 promises to be the best so far, featuring more science and arts events than ever before. We have a packed science theatre weekend, activities at Notte Bianca and Esplora, but the 28th September remains our big night with engaging, creative, thought provoking and highly entertaining activities.”

This year, Science in the City spreads to Triton Square with Of Mice, Carbon and Tritons, showcasing a giant computer mouse and a virtual sculpture. In St George’s Square there will be an interactive art piece triggered by the human body to celebrate Valletta, being a European Capital of Culture.

The Science Fair at City Gate will be bursting with experiments, film, exhibitions, cars and installations. These will include Cinexjenza, Quakes and Shakes, street labs by the Malta College of Arts, Science and Technology (MCAST) and the Institute of Applied Science Student Organisation (IASSO), an EU Corner, Coca-Cola’s Alteraqua, a non-conventional water harvesting programme and Go To, an upcoming idea to reduce the traffic on our roads.Aqua Biotech will take the audience  on an underwater journey, while the Junior College will be participating for the first time. The Department of Systems and Control Engineering together with the Centre for Biomedical Cybernetics of the University of Malta will be showing technology controlled by the human brain. The Department of Mathematics will be challenging minds and the Malta’s Entomological Society will be introducing the Mediterranean’s creepy crawlies.

St James Cavalier (Spazju Kreattiv) will be hosting Kids Dig Science – a puppet show and workshop on the power of electricity, while there will be  a series of talks at Malta Café Sci, on the science behind the artworks of the festival. As part of the project Get Your Act Together, two theatrical performances by actors and playwrights Lizzie Eldridge and Simone Ellul will be held for adults only. Magna Żmien, a Valletta 2018 project for the digitisation of old film collections found in personal homes,  will be located in front of St James Cavalier, in Castille Square.

De Vallette Square on the other hand, will feature a racing car and Water Services Cooperative’s The Future of Water.

At Teatru Rjal, dance, jazz and time travel will entertain the audiences,while a series of science debates will run at Palazzo Ferreria, in Republic Street.

The Parliament Building will showcase Science in the House, an exhibition of exciting research projects by the University of Malta.

Along Ordnance Street, the University of Malta’s Health area will be teeming with information about disease and research. This is the place to find out what is happening behind the scenes in the struggle to defeat illness.

A number of performances combining science and human ingenuity, science magic shows , flames dancing to the tune of science, FameLab scientists, the world’s last radio show and many more will be showing some pretty dangerous stuff. 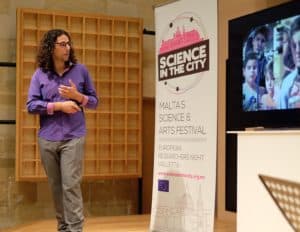 ‘Meet the Researchers’ event gives the audience the opportunity to meet the minds leading innovative research that is shaping all aspects of culture. There will be close to thirty researchers to speak to, whose fields vary from marine biology and mathematics to mechanical engineering and biochemistry.

The National Museum of Archaeology will open its doors for the Gran Salon Project, a journey into the conservation of our culture.

Nature loving NGOs will paint Great Siege Square green. Here Birdlife Malta, Zibel, ACT-Malta, Nature Trust, The Gaia Foundation, Friends of the Earth Square and ERA will give you all the info you need to help make this planet a better place. 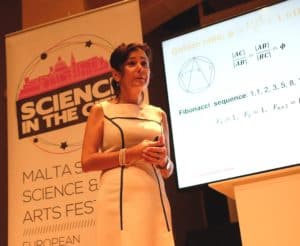 St George’s Square will be under siege by the University’s Student Organisations to share their enthusiasm for everything science in STEAM². Over 300 students will be on hand to perform experiments, playing games and quizzes with those attending.

Other activities include Esplora’s Shadows of Malta’s Times a shadow puppet show that focuses on the timeline of Maltese history, highlighting the links between science and culture. Health checks throughout the night and a mobile dental clinic.

The programme can be viewed on www.scienceinthecity.org.mt.Follow the Facebook page for regular updates: www.facebook.com/ScienceInTheCityMalta