Every year, the lively Irish celebration with St. Patrick’s Day events and activities are becoming ever more popular in Malta. This year, many people attended the celebrations which were held at Cheeky Monkey Gastropub and Seashells Resort at Suncrest in Qawra as the Irish band, Aer Lingus performed live to all those who were present at these two AX Hotels Qawra properties over St. Patrick’s weekend in the north of Malta. 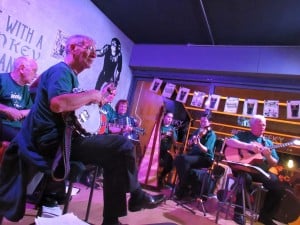 The band played on Friday 17th and Saturday 18th March at Cheeky Monkey and on Sunday 19th and Monday 20th March, they performed once more at the Poseidon Hall at the Seashells Resort at Suncrest, for the guests staying at the hotel. The music played by Aer Lingus band proved to be popular and entertaining, both for locals and tourists, as all performances were well attended both at Cheeky Monkey Gastropub and at the Poseidon Hall.