LifeCycle (Malta) Foundation has sponsored the annual use and maintenance of a van that renal patients utilise as a means of transport in the evenings, for their dialysis sessions at Mater Dei’s Renal Unit. The van provides transport for persons traveling to and from the Renal Unit for their haemodialysis treatment on the Renal Unit’s machines.

For the past 19 years, LifeCycle has been raising money for life saving equipment in order to help persons suffering from renal failure while advancing the awareness about organ transplants in Malta,

This year, the LifeCycle (Malta) Foundation will be celebrating its 20th anniversary since it was first set up by its founder, Mr Alan Curry.  For the second year running, Foster Clark’s has agreed to be the title sponsor of the challenge which will be taking participants to Dubai and then cycling 2,000 km to Salalah in Southern Oman.

In Malta, there are around 200 patients, at any one time, requiring haemodialsysis at the Renal Unit, while another 80 carry out the treatment at home on machines, many of which were provided by LifeCycle. Dialysis is the process by which a complete blood cleansing is carried out as the patient has to sit in an accompanying couch while the machine does the work of the failed kidneys, normally happen three times a week, with each session taking about four hours.

With the early evening shift, called the twilight dialysis shift, offered by the Renal Unit, patients do not disrupt their daily work schedule. Furthermore, the twilight shift transport service curtails disruption for the patients’ families, as otherwise family members will have to do an average of six evening trips per week.

“Previously, family members very often had to step in to provide lifts, and this obviously created a lot of disruption to all concerned,” said LifeCycle Foundation chairperson Dr Shirley Cefai. “The twilight transport service allows the dialysis sessions to be spread over a longer period of the day, and so a twilight shift was able to be established during the evening. The benefits of the van in providing this service have taken a huge burden from both the patients, the patients’ families and, of course, the dedicated staff of the Renal Unit. 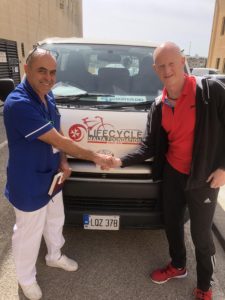 Foster Clark’s LifeCycle Challenge founder Alan Curry said: “With the Renal Unit’s twilight shift and the van service, supported by annual €7,000 donation from LifeCycle funds, renal patients have overcome another major hurdle: in the past, patients would lose their jobs as employers were not eager to allow their employees to leave work during the day on a regular basis.”

Patients do appreciate LifeCycle’s efforts. “Only the other week, a renal patient walked into our training facility with his family and personally donated a sum as a thankful gesture for the use of the twilight van. He told us that for his 60th birthday he will be asking for money which he will donate to LifeCycle. Such signs of appreciation come to mind while we will be experiencing the hardships each LifeCycle Challenge offers its participants,” said Dr Cefai.