History has come full circle at Malta’s most visible tourist attraction, the Saluting Battery below the Upper Barrakka Gardens in Valletta, where two full-scale reconstructed 64-pounder traversing carriages have been returned to transport the visitors to the 19th century.
The timber carriages were introduced in Malta by the Royal Artillery for the mounting of a series of cannons up to 10 inches in diameter and were in use between the 1830s and the 1890s. At their maximum numbers, at least five such carriages were mounted in the Saluting Battery where they commanded a 180° view of the Grand Harbour thanks to their ability to swing around on iron rails. This gun started off as a 32-pounder smooth-bore muzzle loader and was later, at the time of the studded elongated shell, converted into a 64-pounder rifle gun.
During the official unveiling of the carriages which took place at HSBC Bank Malta’s summer event, Mario Farrugia – Chairman of Fondazzjoni Wirt Artna, said: “The rotating traversing carriages were an important part of an army’s arsenal in the late 18th century Europe. Their use in Malta was introduced by the British in the first half of the 19th century and they went on to be used until the 1890s.” 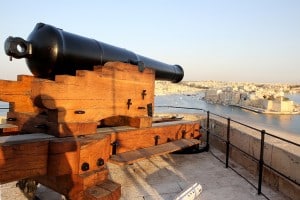 “Unfortunately, after the 1890s, these carriages were relegated to history and not one example was retained for posterity. Thanks to the commitment of HSBC Malta Foundation, the reconstructed carriages are the first authentic example to be returned to Malta’s historic fortifications after an absence of some 130 years,” added Mr Farrugia. 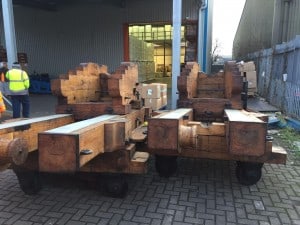 The carriages were typically made from two parts – a lower part known as the traversing platform and an upper part known as the sliding carriage. The latter was designed to slide into the platform with each firing of the gun before being hauled back with the help of block and tackle and lots of elbow grease for loading.
The entire project was financed by HSBC Malta Foundation which involved not just the manufacturing of the traversing carriage in the United Kingdom, but also their transporting and emplacing in Malta.
HSBC Malta CEO Andrew Beane said: “The Saluting Battery is one of Malta’s most iconic sites that has played a remarkable role in the history of the country. HSBC Malta is delighted to have worked in partnership with Fondazzjoni Wirt Artna to restore this vital part of the Battery that had been lost for more than a century.”