To celebrate the success of their popular summer campaign – “Your No.1”, Vodafone teamed up together with ZOO to create a very innovative act, surprising passers-by who were enjoying a stroll on the Marsascala promenade. By simply ringing a service bell, passers-by were accepting an open-air romantic dinner for two. 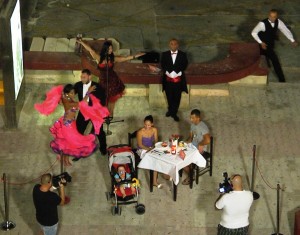 “Your No. 1 campaign was a massive success simply because we all have a ‘No.1’ in our life,” said Monique Brincau Marketing Executive from VodafoneMalta. “Since the Vodafone Summer Campaign gave our clients free calls and SMS to enjoy with that special person this Summer, we thought that the best way to highlight each and everyone’s intimate relationship with their number one was to offer persons walking along the Marsascala promenade a romantic dinner for two. This proved to be a hit. It got a lot of attention from passers-by waiting with anticipation for the second and third act since no one wanted to miss out.” ZOO set up the ambience for a restaurant theme on the Marsascala promenade with all the necessary props. Comedian Sander Agius from the ZOO team walked around the Marsascala promenade holding a service bell in his hand looking for the persons who were willing to ring the bell for a free meal for two. 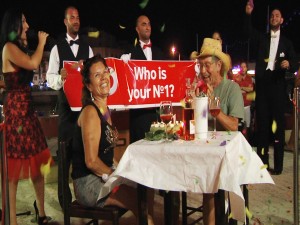 The people who accepted were in for a surprise as the promenade quickly changed to a spontaneous restaurant served with all amenities and entertainment. The people who joined in were given a menu from where to choose their food, wine, waiting service and personal entertainment consisting of a dance routine accompanied by a singer and music. They were also treated like celebrities, finishing off the meal with a mouth-watering cake to celebrate their relationship. 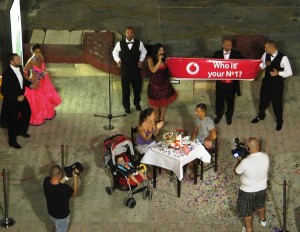 Six passers-by were game and accepted Vodafone’s improvisation. Their romantic meal by the sea side was captured by several passers-by and cameramen who took footage of what was going on. An edited version of the video can be viewed on Vodafone’s Facebook page www.facebook.com/vodafonemalta.