GO is again pledging its full support to l-Istrina – Malta’s high-powered fundraising campaign which is held on Boxing Day every year. GO prides itself on being one of l-Istrina’s longest-standing partners, having actively supported this national charitable event since its inception.
GO plays an important role in connecting l-Istrina with the community by waiving call charges and other expenses associated with phone-in donations. This year, the company has used 5,000 meters of cabling and installed 180 telephone lines in complex operations involving over 900 labour hours.
Speaking about the telecommunications set-up for this year, Pierre Attard, Manager – Fixed Access Plan and Build at GO said: “The network and support for this year’s activity required a custom configuration and necessitated careful planning and execution at each stage. We knew l-Istrina needed a telecommunication system that is reliable, functional, and more importantly, backed by a solid infrastructure – all of which are hallmarks of a GO service.” 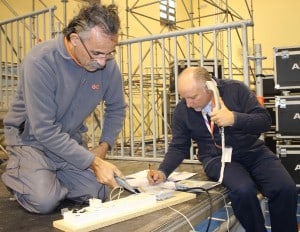 The GO phone-in platform receives calls by donors over the Premium Number service. This system, equipped with a large number of phone lines to accommodate the event, receives calls from the public and accepts donations on a real-time basis. Other additional lines are also required for the support and coordination of the activity including pledge lines.
The backbone infrastructure consists of copper and two fibre cables, with the latter cables being extended to Gozo and Central Malta. These will support all the telecom services including hot lines, general lines, SMS donation lines and mobile connections, as well as DDTV and data connections for high-speed internet use by l-Istrina.
GO’s Chief Commercial Officer, Kurt Camilleri, said: “GO’s support to l-Istrina is the culmination of a year-round effort supporting the community and aiding people in need from all walks of life. Beyond the financial aspect, GO’s support serves as an important contribution towards raising further awareness about the Malta Community Chest Fund and its role in assisting persons in difficulty within the Maltese society.”