Both Parliamentary Secretary for Local Government Stefan Buontempo and Opposition Whip and Shadow Minister for Local Government David Agius praised the role of Local Council Executive Secretaries when they were speaking at the launch of the second edition of the Executive Secretary Award.
“You are the backbone of the local councils and the guardians of good governance and the law,” Mr Buontempo said at the event, attended by the majority of Executive Secretaries, who are members of the National Association of Executive Secretaries of Local Councils and the Regions (ANSEK). “You are the CEOs, the financial heads and the administrative heads.”
He also announced that next month front office staff at local councils will be given training in customer care.
Mr Agius thanked the executive secretaries for the work they do and expressed his agreement with ANSEK for giving this recognition to its members through the award. The event, held at Hilltop Gardens in Naxxar, was also addressed by the Director General (Local Government) Natalino Attard, the Director Adrian Mifsud, the President of ANSEK Paul Gatt and the Chairman of the Award’s adjudicating board, Malcolm J. Naudi.
In his first address to the Executive Secretaries as Director General, Mr Attard said they had to keep three things in mind: sustainable financial management; the need for them to be assertive and hold their ground; and to be committed to keeping themselves updated on the latest legislations, subsidiary legislation, directives and circulars.
Mr Mifsud spoke in a similar vein, reminding the Executive Secretaries that they were part of the Department of Local Government, which supports them in their important, evolving role.
In his introduction to the event, Mr Gatt said that members of the community know the Executive Secretary as the backbone of the Local Council. The aim of the ANSEK Award is to raise further awareness among its members and the public to appreciate the work done by the Executive Secretary, encouraging them to be more creative and innovative.
He stressed that their role was much more than a 40-hour week, with many taking work home or at least thinking about it, often at great personal sacrifice to deliver the best service possible to the people. 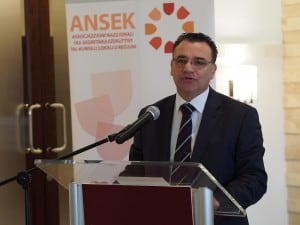 Mr Gatt thanked the members of adjudicating board, also composed of Christopher Galea, and paid tribute to the contribution of Alfred Fiorini Lowell in assisting the board in updating the regulations. Members of the Executive Committee of ANSEK are excluded from being nominated. He appealed to the Executive Secretaries to pass on the message to encourage nominations to the award.
Mr Naudi pointed out the changes in the regulations since the first edition of the Award in 2015. The weighting the adjudicating board is giving in its evaluation of each nomination is more towards initiative, ingenuity and creativity in the Executive Secretary’s work and that left an effect and a positive impact on the Local Council’s work and/or the community (35%); and to distinguishing himself through his service and work that goes beyond what is expected in his normal, everyday duties (35%); than on years of experience and academic qualifications over and above the requisites of the post (15%); and showing that he had done his duty honestly and efficiently (15%). 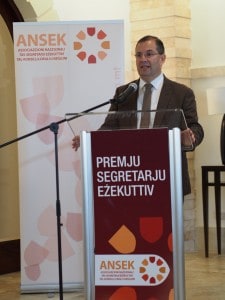 Nominations are accepted from any person who thinks the Executive Secretary of their local council or any other council deserves the Award. These include mayors, councillors, council staff, residents, groups of members of the community, constituted bodies, trade unions and voluntary associations or non-governmental organisations.
The closing date for submissions is 28 February, 2017. A copy of the nomination form, the nominating criteria and the regulations can be downloaded from www.ansek.org.mt.