You are here: Home » Press Launches » CELEBRATING 40 YEARS OF THE FORD FIESTA

This year marks 40 years since the first ever Ford Fiesta was rolled off the production line in Spain. To commemorate this achievement, GasanZammit are offering the first 40 customers who buy a Ford Fiesta €40 worth of fuel each month for a whole year.

“When Ford launched its first car back in 1976, few could predict the success it would make in the coming years. The Ford Fiesta has now become one of the best selling cars of all time and is one of the most popular cars here in Malta. For anyone who is thinking about buying a new car, now is the time to head off to our showroom and check out the iconic Fiesta, to get back €40 worth of fuel each month, for a whole year,” said Carolyn Zammit, Director at GasanZammit. 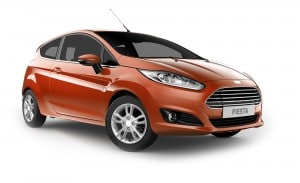 Called the Fiesta by Henry Ford II himself in honour of the company’s new production facilities, the small car offered space for four, was available in just two levels of trim and with a choice of 1- or 1.1-liter engine when it went on sale in Europe back in 1976. Yet as basic as it seemed, even by 1970s standards, the car was an instant hit. Production passed the million-model milestone in 1979 and Ford’s engineers started getting very creative starting in 1981 with the original XR2 a serious hot hatch model with stiffened suspension, a 1.6-liter engine and a remarkable 100mph top speed.

And in the years that have passed, Ford has carried on innovating in terms of practicality, safety and economy – in 1983 it got a five-speed gearbox, in 1989 it became the first small car built in Europe with anti-lock braking and in 1996 one of the first with dual airbags as standard equipment.

The Fiesta continues to set new standards in performance and handling. Following the XR2, Ford went further and further to make the car faster and faster. In 1989 the XR2 became the XR2i thanks to a 1.6-liter fuel injected twin-cam engine. By 1992 Ford had managed to fit the car with a 1.8-liter, 16-valve rally-inspired engine (the RS 1800) and in 2005 that engine size jumped again to 2.0-liters and 150PS, making the Fiesta ST the most powerful Fiesta in history.

When Ford unveiled the seventh-generation model in 2012 it also announced a new ST which had a 1.6-liter, 182PS engine and promptly became Top Gear’s 2013 car of the year. And Ford continues to hone this recipe today. The new Fiesta ST200, announced this spring now develops 200PS and hits 100km/h in 6.7 seconds making it both the fastest and most powerful Fiesta in the nameplate’s history. www.gasanzammit.com