You are here: Home » People » Winner of The Arla Malta Pizza Challenge

The third edition of the Arla Malta Pizza Challenge saw over 40 Pizzaioli compete against each other in a purposely set up pizza tent at the Valletta Waterfront, where Alexandru-Andrei Matanie took the top title of ‘Top Pizzaiolo’ in this year’s edition, and Salvatore Bianca and Paolo Filangeri placing second and third respectively. For the first time ever, this year’s competition fielded international competitors from the Romanian and Bulgaria pizza teams. Passers-by could see all the pizzaioli battle it out for the best pizza in a culinary show of technique, skill, style and creativity. 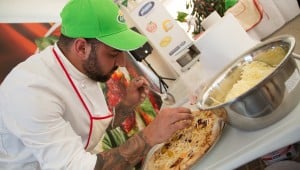 Each participant was given a total of 20 minutes to impress a team of international judges, including David Michel Mizoni, Director at Train2bake Ltd, Luciano Passeri, National Director at ‘Accademia Pizzaioli’ and Francesco Speranza, A.C.E.E.A. Jury President with a selection of three pizzas – the Pizza Classica, the Pizza Creativa and the Black Box Pizza. A dough kneading challenge was held on the final day of the competition.

The panel of judges assessed each participant and scored each step in the pizza-making process, including the preparation, baking, taste, visual presentation, creativity and even the overall hygiene of the contestants’ workstations.

The competition, was sponsored by ‘Arla – Closer to Nature’ through it’s famous Danish mozzarella cheese, and included a number of prizes for the runner ups, with the overall winner taking home an all-expenses-paid professional pizza course at the Accademia Pizzaioli in Italy.