The author was nominated for the Pushcart Prize by Adelaide Literary Magazine for winning the first prize in the annual essay section with his story, The Mysterious Priest in June, closely followed by another nomination for the same prize by the Los Angeles based online PoeticDiversity Literary Magazine for his poem, The Electric Storm in November 2017. 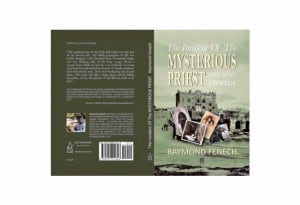 Adelaide Publishers had already nominated the author as a regular contributor of their literary publications.

Dr Fenech was awarded two book length publishing contracts by Adelaide Book Publishers whose offices are on 5th Avenue in New York and listed as one of the top 100 literary magazines in the USA: https://blog.reedsy.com/literary-magazines/

The magazine is also listed in The Writers’ Handbook 2018 and may be viewed at:

The two books by the author, The Incident of the Mysterious Priest & Other Stories consists of a collection of short stories, memoirs and articles and is already available for sale on Amazon Books. The other book is a poetry collection, Growing with the Shadows, which will be launched together with the first book at the third largest International Book Fair, Expo America at the Jacob K. Javits Convention Center‎ in Manhattan, New York, between May 31 – June 1. The opening ceremony will be presided by US Senator Bernie Sanders a former university professor and lecturer very popular in literary circles.

In the letter of appointment to the author, dated 6th March 2018, Stevan Nikolic, Editor in-chief wrote as follows:

With reference to our previous correspondence, after long deliberation with my partners at Adelaide Literary Magazine and Adelaide Books Publishers in New York, also taking into consideration your impressive curriculum vitae, publishing credit list, academic qualifications and writing experience in practically every field of writing, we have decided to appoint you as the Associate Editor for the Adelaide Literary Magazine with immediate effect.

Dr Fenech will be leaving Malta for New York on 27th May. During his stay, he will be meeting with his new colleagues and Editor in Chief Mr Nikolic at the Adelaide Publishing House’s new offices to discuss in greater detail his new role as associate editor of the bi-lingual monthly literary magazine as well as strategies for the promotion of his two newly published books, which it is understood will also include an official launch and book signing in Malta. The venue and date of the luanch in Malta will be announced shortly after his return from New York.