You are here: Home » Sunday Opinion » The PN’s problem is its lack of consistency

One would think, given all the very serious allegations being leveled at the the Labour administration, and especially its failure to take decisive action and set the public’s mind at rest about them, that the PN would slowly but surely be gaining more and more support.

So the question which often comes to mind is, why does the majority of the public still not see the Nationalist Party as a viable contender to lead the country?

It is easy to try and explain this away using the hackneyed excuse that, “oh because in Malta, everyone is corrupt, so they don’t care about political corruption”.   Another reason given is because “as long as the Maltese are doing well, and have money to spend, they will forgive the Government anything.”

While I am not excluding that those two reasons may be a contributing factor which explains why so many continue to prefer Muscat over anyone else, they still do not quite explain the considerable chasm in the polls.  These two reasons also shift the ‘blame’ on to the electorate’s shoulders, which is taking the easy way out and washing one’s hands of any responsibility.  Surely, if you are not giving the voters good enough reasons to vote for you, isn’t it about time you started to ask yourself what you are doing wrong?

Let us set aside the fact that it is glaringly obvious that the PN has been split into two camps: those pro-Delia and those anti-Delia.  A divided party is already starting off on the wrong foot if it is ever to become a viable Opposition and a potential Government-in-waiting.  However, apart from this, one of the main problems I see is a lack of consistency by the PN, as well as by those who support it.

Take the sale of passports issue, for example, where the tenor Joseph Calleja has been made to look like an accessory to corrupt practices because he sang at an event organized by Henley & Partners, thereby ‘endorsing’ them.  If the calls to boycott Calleja’s concerts are to be considered as a justifiable move, then with the same yardstick, all those agents involved in the IIP scheme (among whom are some very high-profile PN names), also demand to have their reputations smeared on social media, with calls for boycotts.  After all, the agents who are getting a cut from passport sales are not only ‘endorsing’ Henley & Partners but are actually in business with them, earning a slice of the profits.  Personally, I find the very idea of publicly-announced boycotts completely ridiculous and outdated, no matter where they come from, but when Labour supporters started calling for boycotts of those businesses whose owners were (supposedly) financing the Civil Society Network, there were those who claimed that this was intimidation and that it was unacceptable to target people individually.  I completely agree: so why target Joseph Calleja? 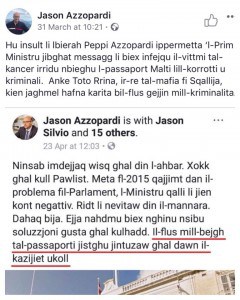 It also cannot be stressed enough, that if the PN wants to be taken seriously any time soon, it needs to really make up its mind where it stands on the Citizenship scheme. It doesn’t help matters when you have someone like PN MP Jason Azzopardi flip-flopping on his feelings about the use of funds from the Citizenship by Investment: one minute he is scathingly comparing Muscat to Mafia king Toto Riina for using the money to help a charity, and the next he is whining about how he wants the same funds, which are apparently no longer tainted, to be used to save a local band club from losing its premises.  Will the real Dr Azzopardi please stand up?

The issues which the PN chooses to get all riled up about are also curiously fluid.  I watched the video footage of Beppe Fenech Adami in the throes of what looked like a scene from a tragic opera, as he spoke about the derogatory, misogynistic names used to describe certain activists (so far, so good, I completely agree that no one deserves to be called names, especially by those holding a public office).

Yet, let me think back a few years now. Wasn’t it the same Beppe who was an eyewitness to columnist Claire Bonello being slapped full in the face by construction magnate Charles “Caqnu” Polidano way back in 2006 while she was pushing her baby still in its pram?  I guess I must have missed his spluttering outrage in Parliament on that occasion against this physical violence on a woman for expressing her views.

And in another clear-cut case of two weights and two measures, I distinctly remember the time that a young, unknown University student, Nicola’ Abela Garrett, had the audacity to describe Austin Gatt to his face in a colourful manner for the disaster that was Arriva. Just to refresh your memories, she had called him a f***ing wanker, a bit harsh sure, but then Arriva, which had been launched with such aplomb and fanfare by the Minister and his faithful sidekick Manuel Delia, had ended up being a damp squib much to the frustration of bus commuters, especially students.

The next thing she knew, Nicola’ was no longer unknown, for her face was plastered online together with lots of unnecessary information about her and her family, all for simply daring to insult a Minister.  The repercussions of all this to her personal life and career affected her for a long time.  Wasn’t that intimidation? Wasn’t that clamping down in a fascist manner on free speech and the right to protest? But I guess freedom of expression really does depend on who you are.   In these supposedly dark and terrifying times, PN politicians claim that people are too scared to criticise the Government, and yet every day I read comments practically accusing the Prime Minister of commissioning a murder (which you will agree is rather more serious than being called a  f***ing wanker).

The most blatant hypocrisy about all this is, of course, that while the PN is now clutching its pearls in horror because some people have taken to using the FB photos of their political adversaries to name-shame them (a tactic I have always abhorred), they are forgetting one itsy bitsy detail.  This vile practice did not start now, and it has flourished precisely because when it first began on Daphne’s blog in 2008 (which would become notorious for this kind of thing), it was encouraged and applauded in the name of ‘freedom of speech’.   The problem is that by (tacitly) condoning it then, they are looking extremely hypocritical in condemning those who are doing the same thing to private individuals now. I repeat, two wrongs never make a right, but to be credible you need to be consistent and not pick and choose when to speak up. You cannot turn your gasps of shock on and off when it suits you, just because it is politically convenient.

One last word goes to (some) of the PN supporters. Far be it for me to tell you what to do, but here is some free advice about the psychology of human nature. Calling Labour supporters ‘species’, with ‘low IQ” and other choice names which dehumanize them, may be hilarious within your echo chamber, but saying these things openly on the monster which is FB is serving to push the buttons of even the most moderate of PL supporters.  It does not take a rocket scientist to conclude that it will hardly make them want to switch their support, let alone vote, for your party.

In fact, the more Labour supporters are insulted, the more entrenched they will become, because it reinforces and confirms their perception that real prejudice across socio-political lines does exist. This is so perfectly understandable, even a six-year-old would get it. (I know, I know, Labour supporters are hardly holding back from throwing around insults either, which is equally unacceptable and the sooner Muscat uses his influence to rein them in the better, because the last thing we need is for political tensions to escalate).

For now, however, and against all odds considering the amount of damning allegations which have been levied at Muscat and his men, the Labour administration has been bruised and battered, but not that severely dented.   Meanwhile, between the split within the party and the constant inconsistencies, the chances of the PN being back in Government any time soon are looking more and more remote.