You are here: Home » Sunday Opinion » Some light-hearted moments in a tense election

This article first appeared on Malta Today
I think we would all agree that if a release from tension were ever needed, then today is the day. The votes are in, they are being counted, and the results should be out any minute (perhaps even as you are reading this on Sunday morning). Half the country will be grinning, while the other half will be scowling, so I am going to thread extremely carefully here.

I also feel I need to make a disclaimer: Today’s piece is not intended to upset anyone who might be feeling battered and bruised, deeply disappointed, and yes, even angry. Nor is it to make light of any of the circumstances surrounding this election. I fully agree that what has brought us to this day has been ugly and upsetting, any which way you look at it, and the repercussions of who wins and loses will not go away any time soon. There are still too many unanswered questions and unresolved issues which need to be set straight and which will impact the way forward for Malta. Whoever is elected Prime Minister needs to show true leadership qualities and has the duty to prove that he is worthy of people’s trust by building up what has been trampled on and nearly destroyed.

Yet, despite the very grave nature of some of the facts, followed by the other (still unproven) allegations, accusations and implications which led us to a snap election, there were the occasional moments when we still managed to muster a smile. And thank God for that, for who wants to go around living under a black cloud of gloom of impending Armageddon all the time? After all, even in times of war people manage to find something to laugh at, because that is what keeps human beings sane. Whether it is a defence mechanism or just pure survival instinct, the ability to laugh in even the most dire circumstances allows us to relieve a lot of pent-up tension.

Also, please realise that there is a particular challenge in writing a column on Friday on the eve of an election, when the outcome is still not known. I also think that yes, we really, but really need to defuse this stifling atmosphere with some laughter.

So, in no particular order here are what I think were some of the funniest episodes of this entire campaign:

Poor Tiffany Pisani, what made her accept such an invitation? The beautiful model of British/Maltese descent, who got nationwide recognition when she made it to Britain’s Next Top Model was asked to introduce speakers at a Labour Party rally. Her English accent in Maltese should have been the first clue that this was going to go horribly wrong. But it was when she came to the name of Tony Agius Decelis that the whole thing really fell apart. She did her best, she really did, but after struggling for a few seconds in confusion she finally uttered his surname as: de la cheese.
I don’t know who I felt sorrier for: for her, or for Tony de la cheese. 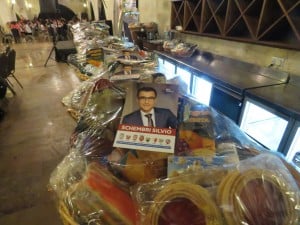 I was under the impression that the tacky (and highly questionable) practice of giving out mementoes and hampers by political candidates was a thing of the past. Although I do distinctly remember that the 2013 campaign was characterized by one rumour that a candidate was giving out household appliances which seems to reflect some very deep pockets. I also remember a cuddly teddy bear once, courtesy of Francis Zammit Dimech, but that was so long ago. So imagine how I burst out laughing on seeing photos of packets of oranges being distributed by Health Minister Chris Fearne and hampers with wine and corned beef by Konrad Mizzi (seriously Konrad? isn’t it bad enough you were even allowed to contest the election?). I also saw some fake pearls and a rose being handed out on the occasion of Mother’s Day. But the one which truly took the biscuit (sorry) was seeing Silvio Schembri and his little bread roll. I mean, what was that about? Was he afraid his constituents would get peckish? I’m still trying to figure out if there was some hidden symbolism behind it. Meanwhile I guess distributing pastries with his picture stamped on them gave a whole new meaning to the phrase BITE ME.

Yes sir, I can boogie

Marlene Farrugia is, as we like to say, quite a ‘type’. Her speeches are fiery and earthy, and her catchphrases have been adopted by the PN because let’s face it “Panama Gang” and “Acapulco-style” are little gems in their own right. But it is when the music starts that she really comes into her own. The lady loves to dance and footage of her getting her groove on at every mass meeting to the sounds of the PN’s playlist were a sight to behold. The inevitable memes followed, with her dancing to all sorts of backing tracks. I have no idea if she will make it to Parliament, but she might consider venturing into a new career anytime someone needs to get the party started.

Picture this: a close up shot of Clint Eastwood at his most menacing from some spaghetti Western, then cut to some other guy I can’t name from a similar western and then cut to: Glenn Bedingfield in all his corpulent glory, as he slowly swivels to face the camera, squinting his eyes as he does so. The shot of Glenn was taken just prior to the debate on Xarabank when Muscat was informed that there had been a new leak of information. While the joke was that Glenn looked vaguely menacing, if you ask me, I just think he’s short-sighted.

But out of everything I’ve seen my all time favourite meme must by the Malta Election Rap Battle 2017 posted by Grandayy Malta. Two opposing rappers and their gangs are fighting it out except one of them has the face (and sound bites) of Joseph Muscat while the other of Simon Busuttil. The attention to detail, the rappers’ biographies, and the perfectly edited sequence – it’s just brilliant. There’s also a twist towards the end. It is impossible to describe  and I don’t want to spoil it for you, so just take a look for yourselves: