You are here: Home » Sunday Opinion » How Facebook killed the media machine

Once upon a time it was quite easy for political parties to harness the mainstream media and get them to sing their tune. These days? Not so easy.

Today, for every official media outlet which exists (and for the size of the country, there are quite a few), there is a website/blog/news portal churning out information and different opinions. It is, however, through the power of Facebook that the real breakthrough has been made. Anyone with a FB profile is a potential commentator on current events. Sure, people use this social network to broadcast their comings and goings, and the fact that they’re drinking a glass of Chablis in front of the fireplace, and even to announce the birth of their children minutes after they’re born. But those are usually people who limit their profile to close friends and family. For them FB is an extension of their immediate circle.

When a FB user has more than 200 or 300 “friends”, however, the circle widens and that is where the interaction becomes interesting.  Of course, when your FB friends include politicians, people in the media and journalists it gives you a solid base of well-informed contacts. However, more and more, I’m finding that it is ordinary people who are providing me with the most interesting and often insightful observations – so many of these FB acquaintances of mine have considerable political savvy, but above all, a great sense of humour and an ability to debate hot issues without getting all hysterical and unreasonable. That is the information network which has really come into its own ever since the divorce referendum. Suddenly, we do not simply rely on what PBS/NET/ONE choose to tell us because suddenly we are there sharing video clips of events ourselves, analyzing them to our hearts’ content. Even if a presenter believes he has steered public opinion in a certain way, you can be sure there will be eagle-eyed viewers who will point out something completely different.

We saw it this week with Lou Bondi and his “what the hell were you thinking wearing that jacket” moment. FB came alive with comments about his questionable sartorial choice. It didn’t help that Lou chose to spend a good two minutes discussing the burning issue of the day: did Franco Debono answer his mobile on air or not? Satirists, cartoonists and anyone with a sense of humour are having a field day with this kind of thing, so perhaps we should all send Lou a huge bouquet of flowers. As for Franco Debono, us opinion columnists could kiss him for providing us with such a rich source of material to work with – forget politics, this guy deserves his own TV show. But here again, it is from FB that I’ve been reading the funniest one-liners, my favourite being that Franco has been on so many programmes on ONE TV, that the only one left is “the cookery programme with (Peter) Dacoutrous”.

The same is happening with newspapers, both in print and online. Linking and sharing stories on FB has become a way for those of us who are news junkies to compare and contrast reports of the same event. The slant of each medium is becoming more glaringly obvious as the election tick tocks its way to its inevitable arrival, and it’s not just a perception which we might carry around in our heads, but there in black and white for all of us to see. It is becoming supremely more difficult for us to be fed the spin which political parties have decreed to be the ‘truth’, because spin only works when you have absolute control on the information highway….and FB has pretty much put an end to all that.

It is also easy to spot the extent of people’s blind loyalty to “their” party when you read certain conversations on FB  …you have those who will continue to regurgitate the official party line even when that very same party contradicts itself from one day to the next with a mindboggling U-turn.

Take that group, ‘Calling for Franco Debono’s resignation’…one minute they were practically after Franco with pitchforks, and then, when Edwin Vassallo assured Franco that the PN’s door is “still open” on Xarabank,  the wall was invaded with comments repeating this very same line,. They even suggested changing the name of the group. Did someone say “pappagall”? It is blatantly obvious that the tactics of how to “handle” Franco have changed, and the message has been transmitted that the attacks on the man should come to a screeching halt. But it’s not quite that simple is it? And even die-hard Nationalist supporters have pointed out that this is a farcical about-face.

I’ve even noticed that public opinion on cyberspace seems to be influencing politicians’ decisions. We had the PM saying that he would be traveling to Qatar, business as usual, only for him to turn around and cancel his trip instead.  I wonder if his advisors were telling him that FB was replete with the youtube clip of the song I’m leaving on a jet plane? 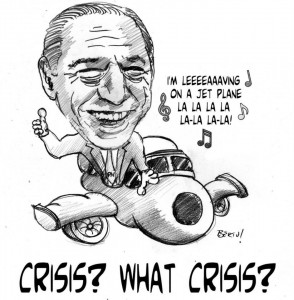 Of course, on the other side of the coin, Labour supporters are working themselves up into a frenzy at the thought of an early election, convinced that this time, victory is within their party’s reach. Perhaps. But I would not take anything for granted at this point because we are sure to reach new levels of muck-racking as the PN struggles to cling to power even if its hold on Castille at the moment is hanging by a bare thread.

Speaking of this desire for power or “kilba ghall-poter”, the phrase which Gonzi keeps repeating like a mantra and attributing to Muscat, I find his righteous, shocked tone downright funny. Well, hello. Obviously the Labour party wants to be in power; why on earth would a political party even exist if not to gain the seat of government?

And I find it pretty rich for the PM to even use this phrase because I would think it is the party which has been in power for almost 25 years and does not want to let go, which has a “kilba ghall-poter”.

I even find all these supposedly virtuous accusations leveled at Franco that he is too ambitious completely hypocritical.  Come on, let’s be realistic here. Name one politician who is not ambitious. Again, why would someone even run for office if not for a naked ambition to achieve a certain amount of glory and the clout which being elected gives you. They might try to convince us that they are only “there to serve” or “to give back” to the country, but I don’t buy it and I never have. So please, respect our intelligence and stop pretending that you are only there because you are on some kind of “mission”. I would respect a politician much more if he/she were just honest enough to admit that he/she enjoys having a high profile.

There’s nothing wrong with that, and it’s certainly much more palatable than pretending you are some kind of St Joan of Arc sacrificing yourself for the greater good.

Similar to this are the people who get so worked up about politics that they practically burst a blood vessel arguing with you about why their party should win.  Why do they care so much, I wonder? And my next thought comes unbidden…what’s in it for them?

For let us not forget, for every politician with an over-sized ego who wants that parliamentary seat, there are the hangers on, his entourage, so to speak, who gain his favour through canvassing and then feel entitled to share in the spoils – as we say in Maltese, “igawdu”.  Then there are the shadowy figures who are also sharing in the spoils but in a much less obvious way – they get the contracts and the tenders and the juicy promotions for themselves and their relatives.

Ah, it’s good to be the King…or at the very least, one of the King’s men.