You are here: Home » Hot Topics » Killing her (not so) softly with his rage

Pictured above: Domestic violence double murder which happened  in 1999

The news which emerged on Saturday morning, that yet another woman had allegedly been killed by her partner, compelled Professor Yosanne Vella to write a significant status on her FB profile, in which she paid tribute to the memory of several other women who have died at the hands of enraged partners, husbands or other family members, or as in the horrific case of Syliva King, because they were simply helping a domestic violence victim.  Because she made it a point to mention them by name, it struck a chord with me, as I realized that too often we only speak in terms of numbers and statistics, while forgetting the identity of the murder victim, and that a whole network of family and friends have been devastated and left numb by the trauma.

I thus felt the need to contribute to her initial list by adding more names as well as the year, while elaborating on the actual details of the murders themselves.  People then started recalling other murder cases related to domestic violence and the tragic roll call of names kept growing. The list is too long to reproduce here but you can check it out on my profile (post dated 16 September).

Even as I researched and compiled the list, I was getting chills. First because of the macabre nature of the murders which were often committed in what was obviously an out-of-control frenzy, and secondly because, sadly, I had ‘forgotten’ about many of them.  Now I consider myself an avid newspaper reader, and to this day I have to have my Sunday papers which I consider my weekend morning ritual.  Reading news stories online, while convenient, just does not have the same ‘feel’ to it for me. And yet, despite being a news junkie, and having worked at a newspaper for 13 years, quite a few of the murders had slipped my mind, and only when I read the full news report did it jog my memory.   This was a sobering thought – so many women, remembered only by their family and close friends, but forgotten by the rest of us because time passes, other news events take over and the deluge of online information we are bombarded with means there is only so much our brains can cope with. 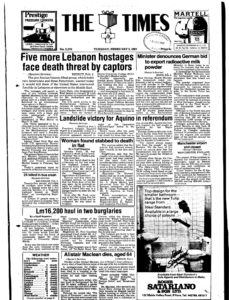 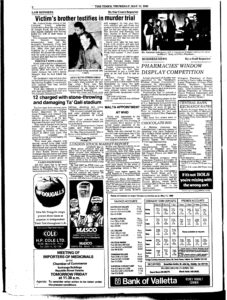 Joseph Fonk stands trial for the murder of his wife

While these type of murders still have the ability to shock us to the core, somehow it seems to me that when the news hit the front page of a newspaper, it seemed to make more of an impact.  And although the word-of-mouth rumour mill would have already been swirling in the village or town where the murder took place, and the initial story would make it to the 8pm news, most of us would still get the gritty details from the paper we picked up from the newsstand the next day.  These days as we know, news waits for no man.  It happens, and it’s online within minutes.   Perhaps this is why the shock value also seems to fade away faster and why it is so important to keep remembering the women behind the story.

So rather than talk about the statistics, which are indeed alarming in themselves, let us zero in on certain facts which emerge. The fact, for example, that stabbing a woman to death, especially in her own home, and in her bed where she is the most vulnerable, seems to be the “preferred” method when it comes to domestic violence murders. As anyone familiar with forensics will tell you, stabbing a woman multiple times in a frenzy is in itself very telling.  According to Practical Homicide Investigation: Tactics, Procedures, and Forensic Techniques,  “The motive in this category of slayings is most often based upon elements of rage, hate, anger, jealously or revenge”.  It adds that “In most instances the event is initiated when the woman attempts to end the relationship or petitions the court for an “Order of Protection” or “Restraining Order”. The court order directs the other partner to stay away from the petitioner and refrain from any further harassment. The man becomes enraged with his loss of control and the attempt by the woman to “break the relationship” and engages in various acts of harassment which include stalking, threats, assault or other subtle forms of “psychological warfare.”

We also have to bear in mind that our size matters. In the US for example, women escaping an abusive husband or partner are often helped to move state and given new identities. But where exactly can you go and hide in Malta?   As can be evidenced by those who have been murdered, even after the woman leaves, some men do not give up.  What is needed is for the violent man to be put away and not for the woman to live the rest of her life in terror and fear.  Domestic violence reports need to be taken seriously by the police, each and every time, and not dismissed as mere ‘family arguments’.  Human resources to deal with these type of incidents need to be beefed up, and all the personnel involved should be properly trained on how to deal with them.  Court proceedings need to be fast-tracked – one hears of cases which have been dragging on for years and as one lawyer recently said in an interview, a woman is sometimes murdered before the police report she would have filed even has a chance to get to court.

Above all, we need to get to the root cause of the problem of why so many men harbour enraged feelings towards women, whom they consider their possessions, and whom they would rather kill and destroy rather than let out of their grip.