You are here: Home » Hot Topics » How much will ever be enough?

As I read about the intended high-rise developments, what I always wonder is …just how much is “enough” for the greedy who are gobbling up everything? In many cases, these are people who were already wealthy before the change of government, and have conveniently ridden on the coat tails of the Labour administration, which seems to be handing out land like candy at Halloween. Meanwhile, we are going to end up with even more huge apartment blocks which remain empty when the bubble bursts.

And it will burst, because there is no way all this unfettered development is sustainable, not when new blocks keep sprouting up next to already existing empty shells of ghost apartment buildings which no one wants. Unless we import around another 100,000 people to live in all this accommodation, the number of vacant dwellings will continue to escalate. The thought of that alone is enough to make anyone gasp for air, because we are already too over crowded as it is, elbowing each other out of the way, and snarling with aggression at the slightest provocation as a result of frayed tempers, too many bodies in too small an area, and no wide open spaces to speak of.

This over-development is only one facet of a problem which stems from something much deeper. We have allowed ourselves to be lured into the spider’s web of living lives which are overflowing with excess. It can be seen everywhere, from the OTT spending on Holy Communion dresses and parties, to the lavish spending on cars we can’t afford and homes which are beyond our budget. 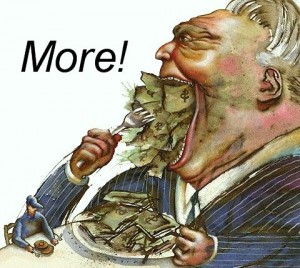 I don’t want to sound like a miserly Scrooge, because I do believe that life is meant to be lived comfortably, and the whole purpose of working hard is to spend money on things we enjoy, obviously after ensuring that one has enough to cover those inevitable, necessary evils known as bills. And hey, if people can afford to live a high-rolling, jet setting, celebrity-type lifestyle, I am certainly not going to be the one to begrudge them this. But come on, realistically, just how many are in this bracket? Shall we, just for the sake of comparison call them our very own 1%? The rest of the population can then be roughly divided into those who are trying hard to live like that one 1%, even though they are hopelessly over their heads, followed by those who aspire to live like those who are in over their heads. At the very bottom of the scale you then have people who are what is known as the “working poor” who are barely keeping everything together as they struggle to get food on the table. Somewhere in between are those who are living within their means, which seems to be a bracket that keeps shrinking all the time.

This is not a commentary against having aspirations, because aspirations are what keep us going, striving to better ourselves and improving our lot in life. But at what point do aspirations slip out of our control and slide into the dangerous, swirling waters of being heavily ridden with debts as we try to keep up with a lifestyle we patently cannot afford? There need to be some kind of brakes applied at some point where we shake ourselves out of this dreamlike stupor of I want, I want, I want, and assess whether our frenzy of consumerism even makes sense any more.

I do not think it is a coincidence that our rates of obesity, drug use, alcoholism and gambling have coincided with a spike in our materialistic outlook towards everything. It is the culture of grabbing everything in sight, stuffing it inside ourselves yet never being sated enough. You don’t need a psychologist to tell you that this is because deep down too many people are feeling empty and soul-less, unable to find contentment in just “being”, but having to compensate for this inexplicable, nagging feeling of dis-satisfaction and restlessness by indulging in excess. Some people become shopaholics, spending money mindlessly on stuff they don’t need, others end up workaholics chained to their PC or smartphone, always sniffing around for the next big investment or venture. What they already have does not suffice, their thirst for money is unquenchable and their quest to acquire more, more, more is relentless.

I have no idea whether enough will ever be enough for some people who live their lives in a constant state of flux, fingers tapping and legs shaking restlessly with pent-up nerves, making it impossible for them to sit still for even one minute as their minds are constantly whirring about what they should be doing next, or where they should be instead.

The irony is that with all this over development, all these restless, never-satisfied people will one day be trapped inside their luxury cars in a national gridlock on a concrete-covered island full of fast food drive-thrus and shopping malls, but no parks…and with nowhere else to go.