You are here: Home » Hot Topics » Getting out the vote

It is clear that, with ten days to go, the biggest challenge for the Nationalist party is to “get out the vote”.

Voter apathy and/or resistance to voting from supporters who used to vote for their party blindly was something which Labour experienced in 2008 with Sant at the helm. No matter how much he tried, he just could not convince enough people; between the damaging strategic mistakes from his own camp and the relentless onslaught from PN friendly media, his image was successfully torn to shreds. (Ironically, these days I keep hearing that Sant, after all, was right and from some PN quarters I have even read that Sant would have been better than Muscat.  Go figure.)

In 2008, the PN was also facing a weary voter base and it was only at the last minute that Gonzi managed to squeak into power with a wafer thin majority.  AD, as usual, was “blamed” for almost “losing” the PN the election because it attracted a substantial number of votes.

Fast forward to the present day, and AD is still being blamed, because, I suppose, in the topsy-turvy world of Maltese politics, a third party should just sit there and behave like an obedient puppy, rather than actually going after its share of votes.

The Labour party, meanwhile, is almost unrecognizable from the shambles (image wise) that it was five years ago. It has recouped its lost votes and seems to have made inroads into voting patterns unlike ever before.

Of course, it has still made its share of PR mistakes, especially the recent ‘tal-pepe’ video. Why on earth would you yourself feed into the “maaaa x’biza’” stereotype about what it means for a certain social class to vote Labour?  If voting Labour instead of PN this time round is something natural in a democratic country, the “rebel” daughter should have just calmly stated, “I’m voting Labour”, with the father casually replying (not whispering), “Really? Me too” (while the Nationalist-voting mother is still in the room). No need for all that drama and subterfuge if you truly want to relay the message that voting Labour is not the end of the world as we know it.   It was begging to be spoofed and it is no surprise that it was given the “goat” treatment:

There are other reasons why this video rubbed people the wrong way, which were dealt with in an excellent analysis, by Matthew Vella in Malta Today.

Meanwhile, the PN is equally unrecognizable from its slick 2008 campaign. With the shoe now on the other foot, the PN is busy blaming everyone for its current poor showing in the polls:

–          it blames former, high profile PN stalwarts for being “opportunists”

In short, it is so busy trying to apportion blame that it keeps missing the bigger picture. What the PN seems doggedly unable to swallow is that there are many genuine reasons why many of its former supporters feel disenchanted.  Instead of acknowledging what has gone wrong in this administration, PN politicians seem to alternate between sneering at voters when they voice their concerns and high-handedly demanding that voters give them another five years to “get it right”.

When all else fails, the tactic shifts and the campaign reverts back to scaremongering.  Since that doesn’t seem to be working either, activists are now being roped in to encourage “relatives and friends” to vote PN.

When you log onto mychoice.pn, the software suggests friends on Facebook whom you might be able to convince.  Similar adverts are also appearing in print as can be seen below. 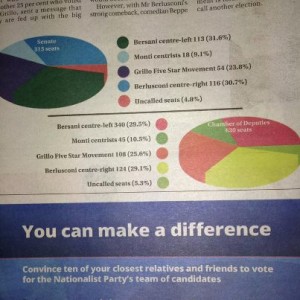 The problem with this intrusive strategy is that badgering other people about how they are going to vote is probably the best way to get their backs up.  In a democracy everyone has the right to do whatever they wish with their vote, and it is highly presumptuous to go around dictating to others to vote like you do.  Yes, it’s true that the way everyone votes (and even if they don’t vote) affects everyone else’s life, but that’s the way the cookie crumbles isn’t it? It has always been thus.

If it were any other way, we might as well not have elections at all, and remain with the same political party in government in power forever.

The scary thing is that there are people who actually believe that this last sentence would not be such a bad idea.