Meltdown – and it’s not just the weather

In June 1998, Alfred Sant, then Prime Minister, was facing dissent within his own party. By that time several of his key people had already resigned, claiming they could not work with him and ultimately, with cruel irony, it had to be Dom Mintoff himself who did everything in his power to bring the short-lived Labour administration down.  Granted it was Sant who called the early election, but in hindsight, it becomes clear that governing with the Mintoff thorn in his side would have been impossible.

Today, 14 years down the line, we are facing a similar scenario as Prime Minister Gonzi grapples with the turmoil of rebel backbenchers; turmoil which has been brewing ever since the last election.

Although not everyone agrees that the two situations are comparable, I see a lot of parallels. In both cases you have stubborn Prime Ministers who seem to take the wrong advice from a closed circle of people, often to the detriment of the country.  And in both cases, it is the internal criticism and outright mutiny from within which is destroying the party in government.  Meanwhile, the rest of us watch in astonishment as what was once a very united party self-destructs and implodes before our eyes.

Of course, it will be pointed out that the reason the PN backbenchers have rebelled the way they have is that they were not suitably rewarded for their showing at the polls.  But even here I see a similarity – was not Mintoff similarly outraged when, after  standing for election in ’96 and clinching the vote of the hardcore “mintoffjani” , he was then ignored and slighted by Sant?  As for accusations that members of the Opposition as well as supporters have been cheering from the sidelines and egging on both Franco Debono and Jeffrey Pullicino Orlando, well let’s not forget how Net TV fell over themselves to give Mintoff as much airtime as he needed. Suddenly, with the prospect of an early return to government within its grasp, the PN turned its  bête noire into its temporary ‘hero’. 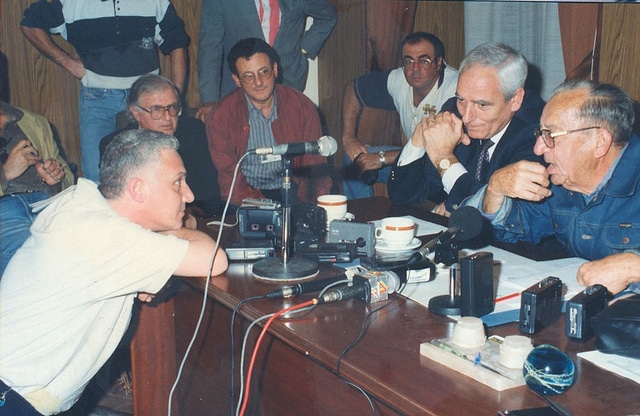 All eyes on Mintoff in 1998 as he holds a press conference (photo taken by Malta Today, used with permission)

The thing is that in politics it often boils down to “use and be used” – and everyone is happy to play along with the game until the hour of reckoning comes. Ultimately, when push comes to shove, whoever has had a hand in getting their party elected (from canvassers to ‘helpers’ to the candidates themselves) expects something juicy in return. Forget serving one’s country, I have long ago concluded that (save for a few exceptions) whoever enters the arena does so out love of power and glory.

In the context of the bombshells we have seen being dropped over the last few weeks another aspect also becomes clear. If you are going to create a mise-en-scène and use a candidate to win an election by highly unethical means, only to drop him when you have achieved your purpose, then don’t be so surprised when that same candidate no longer refuses to play ball.

What has happened is merely Karma catching up with everyone and biting them firmly in the backside.