You are here: Home » Features » The only way is up 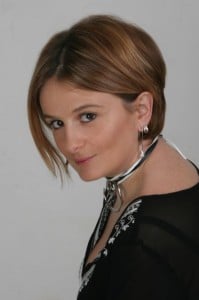 She is 39 years old and works in the corporate world of  investor relations for a leading Hedge Fund. But in her spare time Maria is a self-confessed adrenaline junkie. She describes herself as  being fiercely loyal towards the people she loves, and as someone who detests hypocrites and people who vent their frustrations on animals.

“Sport, in my family was considered to be a distraction from academic achievements so I only started practicising some form of sport (badminton) when I was 16 years old after having ‘safely’ obtained a good amount of O Levels. I can still feel the pain of stiff muscles after the first training session – I could not move, even having a conversation hurt!”

While sport and adventure did not feature in her life at a young age, Maria did the next best thing and experienced them vicariously.  “Programmes and books depicting adventurous feats such as horse riding across a desert, scuba diving on reefs and climbing mountains kept me engrossed much more than programmes such as Little House on the Prairie, which in my time was considered to be the programme to watch. So I guess the sense of adventure took root in me from a young age.” 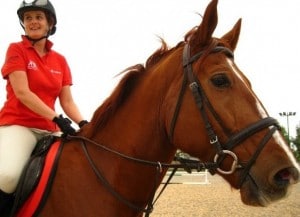 On her beloved horse Daffyd

Although I know her to be a keen horse rider and tri-athlete, she tells me that climbing mountains was her first love.

“In reality, mountains were the first physical activity that I participated in, long before equestrian sports and the triathlon came into the pictures. My first taste of mountains came in 1997 when I completed the Gold Award section of the Presidents’ Award Scheme. Having completed a four day expedition in Snowdonia in Wales, our group decided to trek up Mount Snowdon and that is where I caught the bug. Over the years I took part in expeditions on Mount Rainier (Seattle, WA), Mont Blanc (France), Mount Kilimanjaro (Tanzania) and now Mount Toubkal in Morocco.” 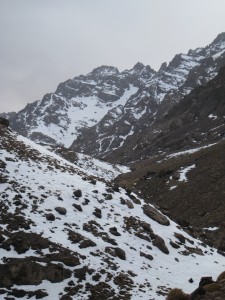 The only way is up...climbing the summit

She explains that weather on the mountains is very unpredictable and a 100% success rate is not something guaranteed. In fact, disappointments were faced on Rainier and Mont Blanc.   Mt Toubkal was chosen as it offered an excellent opportunity for a winter climb in an environment that provided tough conditions which included snow and ice, conditions that not all members of the team were exposed to previously.

“My family and friends were not totally surprised by my decision to take part in this activity – by now they have given up hope of me taking up knitting as a hobby.  My mother, naturally, worries about me but hides her concern and at times lack of enthusiasm well and supports me fully.  I am lucky to have some really good supportive friends too, who give me motivation when at times this might be lacking”.

Needless to say, training to climb a mountain is not easy in Malta.

“We do not have the required altitudes so acclimatisation on location may not always been managed as effectively as one hopes.  The least one can do is obtain a very good level of fitness in order to be able to withstand long periods of activity.  Having to train for triathlon and horse riding competitions already fills my week quite substantially so finding time to take part in treks on a regular basis was challenging”, Maria says.

For anyone who has never climbed a mountain (which is most of us), it is hard to fathom what is actually involved in this challenge, but Maria gives me some numbers to give me some idea of the changes in altitude.  Suffice to say that on the actual trek the altitude went up from sea level to 3207 metres in just one day, and up to 4167 metres in 48 hours.

“My heart rate sky rocketed and breathing was difficult at times, other than that my fitness levels were sufficient to walk at a good steady pace up to the summit and back down again.” 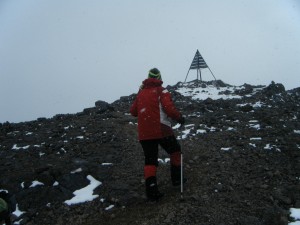 In answer to my inevitable question as to whether she ever thought of giving up, she replies:

“Giving up?  In such challenges I have a symbolic ‘angel’ sitting on my right shoulder egging me on, not to give up and keep pushing my limits, while on the left shoulder I have a little ‘devil’ sniggering and telling me that a sofa or couch would make me feel much better……the ‘angel’ always wins. As Lance Armstrong says, ‘Pain is temporary. It may last a minute, or an hour, or a day, or a year, but eventually it will subside and something else will take its place. If I quit, however, it lasts forever.’  So, yes, I do get moments where I feel like throwing in the towel but unless something beyond my control occurs, I will never give up!

But even Maria’s indomitable spirit has had its share of setbacks. Last June, she was hit by a car whilst training for a Half Ironman race (1.9k swim, 90k cycle and 21k run, carried out in succession).

“The driver decided to block the cycling lane while making a U turn in an area where this was not supposed to happen, the result being me performing a summersault and ending up on the other side of the road. Thankfully no cars were coming from the opposite direction but I sustained injuries to my knee and wrist which obviously set me back in my training. The frustration of not being able to train can get to you, patience not being one of my virtues. What is more frustrating is that the incident could have been easily avoided, had the driver obeyed simple traffic rules and respected the fact that a cycling lane is just that and not a parking/stopping area”.

While she was still recuperating, she also underwent some required knee surgery in November, which meant another few weeks of convalescence and missing out on a couple of races and competitions.  “Thankfully I have the support of a great training buddy, something which helped me greatly during the recovery process”.

“I always say that sport helps me keep me sane and people around me safe, as the release of endorphins help me get rid of day to day stress. Being put out of action for a couple of weeks was a major lesson in not taking things for granted and I now complain far less when I have to get out of a warm bed in the early hours of the morning to train”.

As someone who is so active and full of life,  I ask her whether she can relate to people who are lazy or apathetic and have no real hobbies.

“I must admit that given half a chance I can be the biggest couch potato that ever existed.  As mentioned before I was a late starter to these kind of things and I do enjoy a lie-in especially in winter when the sun seems to take its time to rise and the temperatures are cold. I don’t expect everyone to be a mountain climber, a horse rider or a triathlete but I strongly recommend some form of exercise or hobbies.  Life is such a rat race that exercise and hobbies can really help ease off the pressures that we encounter in our day to day lives”.

Maria has no shortage of options to help her ease the stress, for apart from climbing mountains, horse riding and triathlons, she also sings.  She is hoping to once again form part of the Voices choir, after having taken part the first time two years ago.

“I enjoyed every minute of it – singing can be so therapeutic (and all the activity on stage is a work out in itself too) and more importantly this effort all goes towards a good cause”.

Her physical training has not stopped as she plans to take part in possibly two Half Ironman races this year in preparation for a full Ironman distance next year. “I still have some knee issues to solve but am determined to see the finish line, whether I run, walk or crawl. After that, who knows? The world is my oyster!”

We live in a world where most people only look at results and occasionally look down upon the athlete that comes in last. They only look at the placing obtained in a race, the time taken to complete a course etc.  My suggestion is look beyond that. Look at the sacrifices and the effort an athlete puts in to be on the starting line……