You are here: Home » Features » A multi-sensory experience

Young people with profound and multiple learning disabilities are often excluded from cultural events.  A recent theatrical production during the the Ziguzajg festival, however, was created specifically for them. Josanne Cassar speaks to Louise Ghirlando about the multi-sensory performance of Neith: Performing our World

In order to allow for a multi-sensory experience, Louise Ghirlando kept in mind that it needed to be a three-dimensional piece. “I wanted the audience to be invited to enter our performance, rather than sit and watch it at some remove. The set, designed by Jo Tabone, therefore needed to be designed to encompass the audience areas. We created a tent that the audience entered from the outside, thus creating a clear cut-off from the world outside, but also being warm, and holding in itself. The experience of being in the tent was an important part of the performance itself. In fact, that was an experience in itself, before any ‘action’ actually started.

Louise explains that they based the unfolding of the theme ‘the creation of the world’ on the Egyptian creation myth, Neith.  “Neith is goddess of water which gave us the platform from which to create a sensory experience of evolving elements beginning with water. Everything is literal as well as metaphoric in this piece; literal, in the sense that every element is represented with a tangible, sensory element. We also worked the elements to have spill-over effects so that there would be direct contact with the audience – the splashing of water, floating of soap bubbles, wind, and so on. We also used elements in a more direct way to create contact with the audience – for example, by using a large puppet which we took close to the audience for the tactile experience, as well as a lavender plant that was our way of tapping into the olfactory sense.”
The soundscape also filled the space, from using natural sounds to recreate the sound of sea, to using pebbles for earthy rhythms, voices, and primarily through the music score composed specifically by Veronique Vella who also performed live on the piano.

Diana Cauchi and Louise herself also performed, devising actions and movement sequences that worked through the elements. “It is a particular way of performing, where the performer is also constantly aware that her role is to facilitate an engaging performance experience that is specific for each person in the audience. Therefore the performance structure allows for flexibility of time and emphasis, depending on the particular engagement of the audience at each moment. Diana and I are both drama therapists, and our profession enabled us to apply the skills to engage with the audience in this unique performance. Veronique’s composition was also built through a series of motifs which could be extended and improvised around the various moments.” 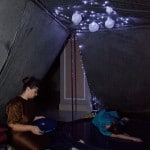 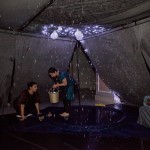 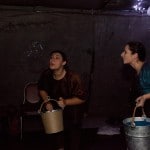 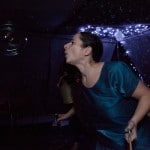 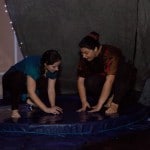 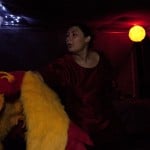 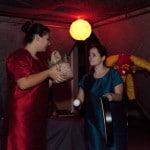 So what was the reaction of their audience? “Some people described it as being relaxing, holding, ritualistic, and transformative. Others reacted in different ways, by overtly showing excitement and constantly reaching out to touch. One person began to sing with us – for me that was the most touching experience because of its spontaneity and the genuineness of the moment. It felt special because it was a direct and concrete sign of direct engagement and enjoyment.”

This was Louise’s first experience in creating a piece which was specifically targeted at engaging an audience of adolescents with profound and multiple learning disabilities (PMLD). “I have wanted to create this kind of multi-sensory production for quite a few years for two reasons – first because of the scarcity of these types of performances. As a performer this kind of work is very exciting to me. It gives me a platform from which to create a completely new piece that involves my whole self, and it allows me to play and spend time exploring different elements and the performance effect they could have. I also wanted to do it because I am always on the lookout for performance work that is genuine and I find that with an audience of adolescents with PMLD it can only be this way.  As soon as it is not, they feel it and they don’t engage, and as a performer you will immediately know if it is working or not. The contact is real, immediate and spontaneous.”

She points out that the performance is so intimate that it allows for the stimuli to be directly and physically within reach, and the immersion into the experience is real and tangible. “To engage them, people with PMLD need to be at close proximity with the stimulus, so a traditional stage/audience formation will not engage them. A small audience also allows for direct interaction with the performers too.  The environment is warm and containing for the audience to feel welcome and safe, while at the same time having an exit which is clearly visible too.”

The benefits to PMLD adolescents is that it appeals to their sensory sensitivity, and touches into multiple senses so that each may engage with different senses at different levels and different moments. Nevertheless, the focus at each moment is clearly directed to a specific sense.

Understandably, such a production has its own unique challenges. Since everything depends so much on audience reaction Louise experienced a lot of anxiety prior to the first performance, worrying about whether it would work or not.  “We workshopped some aspects of it at a resource centre with some young teens in order to get a richer feel for how they would react to the work and that was very supportive to us in the process.  Another challenge is the fact that since the audience is so small, it makes it financially very difficult to get a return from it. The many sensory elements also make it expensive to build because there is a need for an intricate set and a dependence on props. This production was possible because we got funding to develop it from the Malta Arts Fund. Ziguzajg have a strong inclusive policy and were therefore definitely interested to host it at the festival for its premiere. Now we plan to take it onwards for more people to enjoy the experience. This will require a lot of financial support from external sources.

Louise feels that as a society we have become more and more aware of the rights of those with intellectual disabilities, including the right to self-fulfillment, growth, choices, decisions and independent living. “Our educational system has seen great strides in allowing for inclusion and there has been a lot of progress made with the creation of training programmes and support schemes for employment.”

Having said that, she also says that there is still a lot that needs to be done to really break down prejudice, especially on a one-to-one basis where people interact, communicate and employ. “We need to focus more on the abilities of a person when interacting with them, rather than immediately presuming inability.”

Fresh from the warm response they received with local audiences, Louise and her team have ambitious plans to take their production overseas. But first, they wish to make it more accessible for those who still have not watched it in Malta.  For this reason, it has been designed to be portable so that they can travel with it. “We have made contact with some organisations abroad and are looking at possibilities.  There are some people who wanted to watch it who did not get a chance to during Ziguzajg because we can only perform to small audience numbers at each performance.  We therefore plan to perform it again here too, as well as in Gozo.”

But while the main target audience is people with PMLD, by no means is this performance restricted to them alone. “During the development of the work, we did invite some people to be our test audience. These were non-disabled colleagues of ours, who nevertheless told us that they enjoyed the work in their own right, rather than just focusing on what it would be like to our target audience. Before watching it, I asked people to experience without thinking, to immerse themselves in it.  The feedback I received was that it triggered memories of early play, and that it was a vivid, heartfelt experience. The whole body experiences such work, rather than just the head. My 97-year-old grandmother also watched it one day when we were rehearsing. She did so out of curiosity because she is always asking me about my work and what I do without being fully able to imagine it. So I asked her to watch this and she was very engaged. This made us think that with some tweaking it could also be entertaining for an audience of older adults. I think with some adjustments it could be worked for different audiences, even for very young children just reaching out to the world.  Of course we would have to tailor each new performance so that it would be appropriate for each kind of audience, but it is definitely possible.