Eine Kleine Nachtmusik is the title of a concert being held to mark the 25th anniversary of Dar il-Kaptan, the Foundation for Respite Care Services, on Monday, 28 November, 2016, at 8 p.m. at the Manoel Theatre.
The concert takes its name from one of the three works being performed. Apart from this Mozart Serenade, there is also his Flute and Harp Concerto K. 299 and Handel’s Concerto Grosso Op. 6 No. 11 in A Major.
The performers, all musicians from the Malta Philharmonic Orchestra, will be conducted by Adrian Butterfield with soloists Britt Arend (harp) and Rebecca Hall (flute).
Eine Kleine Nachtmusik is at once well known and mysterious. Serenades composed to be played outdoors, especially in summer evenings, would generally have been performed by ensembles of wind players, which make this composition rather unusual.
Also unusual is its length, much shorter than the usual seven or eight movements expected of a Serenade. Mystery also surrounds the reason or inspiration of its composition, as well as the identity of any possible patron. Still, the melodies are among the most enchanting of Mozart’s works; genius lying in the simplicity and elegance in the turn of each whimsical phrase.
George Frederick Handel’s Concerto Grosso in A major, Op 6, No 11, along with his other similar concerts, is thought in some circles to be inspired by the Italian violinist and composer Arcangelo Corelli, whom he met on his many travels to Italy.
This concerto begins in French Overture style, with its recognisable dotted rhythmic patterns, followed by several brief movements that contrast the lyricism and vitality of this baroque master. 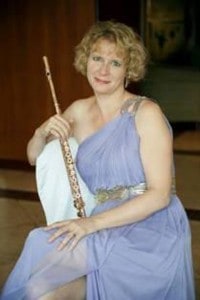 The flute featured prominently in Mozart’s middle period. It was the focal point of two concerti and a series of quartets for flute and strings. The Concerto for Flute and Harp, K. 299 was composed in the spring of 1778 as part of a commission for the Duke of Guines, who was a celebrated flutist and established member of Parisian society. The Duke and his harpist daughter required a composition which would highlight their skills, without being as taxing as a composition for professionals may demand.
Obliging his patron, Mozart produced a work of simple, yet sublime elegance, allowing a delightful mix of virtuosity and melody. The two instruments themselves are matched in terms of their soloist moments and work as individual voices, as well as paired in duet form.
Adrian Butterfield (pictured above) is a violinist, director and conductor who specialises in performing music from 1600-1900 on period instruments. He is Musical Director of the Tilford Bach Society and Associate Director of the London Handel Festival and regularly directs the London Handel Orchestra and Players. He is also a guest soloist and director in Europe and North America with modern and period ensembles. 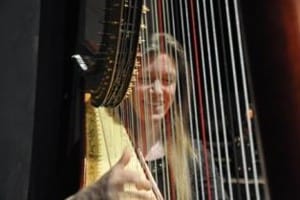 Britt Arend, Principal Harpist of the Malta Philharmonic Orchestra since 2008, has performed with several professional orchestras in Belgium (Opéra Royal de Wallonie and Orchestre Philharmonique de Liège), Germany (Dresdner Sinfoniker, Radio-Sinfonie-Orchester Frankfurt, Philharmonie der Nationen and Filharmonisch Orchester Kiel), Italy (Teatro dell’Opera di Roma, Teatro Lirico di Cagliari, Accademia di San Giorgio di Venezia) and Ireland (RTÉ Concert Orchestra).
Maltese-Canadian flutist Rebecca Hall has been at the forefront of music in Malta since moving to the island in 1996. She is a muse of the celebrated Canadian composer Jack Behrens, whose works for flute were the subject of her Doctorate of Music thesis. In addition to her busy performance schedule, Dr Hall lectures in flute, baroque music and women in music at the University of Malta.
For full details on the performers and to book visit the Manoel Theatre website http://www.teatrumanoel.com.mt/default.asp?m=shows&id=610.