You are here: Home » Events » Celebrating 90 years of Brewing

Pictured above: Farsons Chairman Louis A Farrugia presenting a donation to Ħamrun Mayor Christian Sammut to go towards the fund for a new statue of Our Lady of the Immaculate Conception

Farsons marks the occasion in Ħamrun, where it all began, with a donation to the community

Simonds Farsons Cisk plc and Ħamrun Local Council marked the 90th anniversary of Farsons Brewery with a formal reception held at the premises of Ħamrun Local Council. The occasion celebrated the launch of the Brewery’s first beer, Farsons Pale Ale (popularly referred to as tal-Iġgant), in April 1928.

In his speech marking Ħamrun’s significance in this milestone, Farsons Chairman Mr Louis A Farrugia outlined the historical highlights that, over a span of more than a century, connected the Farrugia family and later the Company with this locality.

The Farrugia family had initially established a four-floor flour mill and pasta making factory, called The Victoria Steam Roller Flour Mill. The street where the factory was located was called Strada Pastificio; and subsequently changed to Farsons Street. When this mill was destroyed during the Sette Giugnio riots in 1919, the factory was changed into a carbon dioxide producing facility called L. Farrugia and Sons Ltd. “Notwithstanding the challenging times, my grandfather Luigi was among the first Maltese to realize that Malta had a future in industry,” explained Mr Farrugia.

L. Farrugia and Sons Ltd was soon supplying various clients, among which H. G. Simonds Brewers. Simonds imported beer in bulk from the U.K. and had it bottled and carbonated locally. Both British armed forces and the Maltese were good consumers of beer, and importation of the product was constantly on the increase. Through this contact with the brewing industry, the Farrugia brothers – on the advice of Luigi’s son, Lewis V Farrugia, who was then 25 years old, decided to venture into this thriving sector. They made a crucial decision – they would brew beer themselves in Malta rather than importing it. Their first brewery in Ħamrun was a first for Malta, as well as a brave and innovative step in the country’s economic and industrial history.

Refering to the label on their first beer, Mr Farrugia highlighted a number of elements that were to anticipate the pioneering spirit of the company. The Farrugias coined the name ‘Farsons’, incorporating the first syllable of their surname and the latter part of the company’s name, ‘sons’. It was the first time this brand name was used. Over time, it became the name of the company itself.

The Farsons Pale Ale label also featured Neptune as an emblem for the first time. Referred to by many as ‘l-Iġgant’ (‘the Giant’), this iconic figure was reproduced from a watercolour by the renowned artist Edward Caruana Dingli (1876 – 1950).

The label stated that L. Farrugia and Sons were both liquid carbonic acid manufacturers as well as brewers. Furthermore, the brewery boldly declared that its product was ‘naturally matured – no chemicals – no preservatives’.

“When one considers that these product assurances where given ninety years ago, well before the current awareness about the importance of natural ingredients and the avoidance of chemicals, one can only admire the brewery’s foresight,” said Mr Farrugia.

As Ħamrun developed and grew, so too did Farsons. Its Pale Ale was an immediate success on the market, which led to Farsons and Simonds joining forces only a year later. Simonds Farsons extended its product line, with Blue Label also being launched in 1929. Just down the road, in Strada San Giuseppe (now High Street) also in Ħamrun, another brewery known as ‘The Malta Export Brewery’ was gearing up to produce lager type beers. Their first lager, popularly called ‘Cisk’ after the nickname of the Scicluna family which owned it, was advertised for the first time in August 1929 in time for the feast of St. Cajetan. Simonds Farsons and Cisk were eventually to merge in 1948, forming Simonds Farsons Cisk Ltd.

Another personal connection between Farsons and Ħamrun was the late Anthony Miceli Farrugia who was born there in 1914. Affectionately known by one and all as ‘is-sur Nini’, he was to take the helm of the company following the untimely demise of Lewis Victor Farrugia. It was Anthony Miceli Farrugia who came up with the idea of an original product by the name of Kinnie in 1952, considered as Malta’s own national soft drink.

Lewis Victor Farrugia conceptualised and was involved in much of the planning for the company’s second brewery in nearby Imrieħel. This historic building is now considered a unique part of Malta’s industrial heritage. Now, this brewery building is being re-born as a Business Park of the highest standard, led by Trident Estates plc.

The links between Farsons and Hamrun continue on several levels. In 1951, Farsons made premises available to the Parish of St. Cajetan to be used for the teaching of doctrine. Later, this place became a chapel, and is still referred to by some as the Farsons Chapel.

Lewis Victor Farrugia’s connection with Hamrun extended beyond brewing and philanthropy. For several years, he was in charge of the Milk Marketing Undertaking (MMU) turning this into a profitable enterprise and launched a new product still sold today: ricotta cheese. 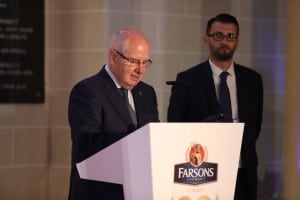 Mr Louis A Farrugia concluded by remarking that, whilst both Farsons and Ħamrun went through various challenges and a profound change, strong links continue to bind them. To mark Farsons’ 90th anniversary, an important milestone for both, Mr Farrugia announced that Farsons was making a donation towards the fund for a new statue of Our Lady of the Immaculate Conception to be placed in Parish Priest Muscat Square in Ħamrun, now being refurbished, as the parish celebrates its own 50th anniversary. 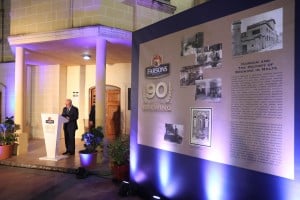 Ħamrun Mayor Mr Christian Sammut thanked Farsons for their donation and for their continued and tangible support towards Ħamrun. “This is a very tangible sign of corporate social responsibility as it shows that Farsons have always kept in mind the origins of the company in Ħamrun,” said Mayor Sammut. “As Ħamrun is experiencing a revival in both economic growth and its population, I appeal to businesses and investors to consider seriously this locality when setting up or expanding their business or services.”

Present for this event were Members of Parliament, local councillors, the parish rriests of both Ħamrun parishes, representatives of the locality’s organisations, as well as senior management from Farsons Group.