You are here: Home » Environment » Townsquare developers to reduce tower height by 37m

Visual impact of project has been dramatically reduced

The developers of the Townsquare project in Sliema are to reduce the height of the proposed tower by 37 metres – equivalent to 11 storeys of the previous tower –dramatically reducing its visual impact.

Townsquare has submitted new designs to the Planning Authority following a decision in May by the Environment and Planning Review Tribunal which stated that the developers must effect certain revisions to the project application which the PA had approved in 2016.

A spokesman for Townsquare said: “Our new designs comprehensively address the revisions requested in the appeal decision; but also incorporate a tower that has been significantly reduced in height.”

The project, set over a 12,000sqm site, will still retain the same amount of open space as originally proposed, some 7,500sqm, that will become the largest pedestrian zone inSliema’s town centre. This area has also been reconfigured to include a better flow for pedestrians, substantially more greenery and a landscaped rear garden – all accessible to the public. 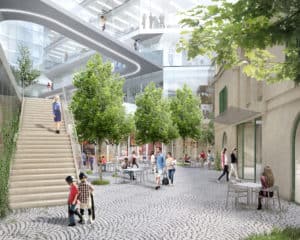 The new tower will be made up of one double-heighted commercial ground-level and 27 residential levels, but since these have lower height dimensions it will be equivalent to 27 levels of the previous tower.

Townsquare is owned by Townsquare Sliema Limited, a joint-venture between the Ganado, Gasan, Soler and Trapani-Galea families.

The new design statement and visuals may be viewed on the Townsquare website, while further information may be obtained from the Townsquare Project Office in Tigné Street, Sliema. A helpline for residents is also available on 2789 6034 or 2133 1560.