Recycling cooperative GreenPak battery collection scheme has retrieved over 36 tonnes of used batteries since it was launched 18 months ago, which have all been recycled rather than being dumped and left to contaminate the natural environment

Batree, funded by private industry, has collected more than double the volume of batteries than the government-run Batterina campaign which it replaced.

GreenPak CEO Mario Schembri said: “The Batree campaign has exceeded our expectations since we took it over last year and this is down to the public who have reacted very positively to this environmental initiative.

“Along with other environmental initiatives promoted by GreenPak, Batree is helping to make Malta a better place and we will redouble our efforts to further improve these positive collection statistics.”

Almost nine tonnes in batteries were collected by over 100 schools over the past scholastic year after GreenPak introduced a competition to incentivise collection.

The largest volume of batteries was collected by St Francis School in Xagħra, which averaged an impressive 17.5kg of batteries per student and was awarded a computer, while Eduardo Trombino walked home with a tablet for being the top pupil collector. These prizes were kindly provided by V.J. Salomone Marketing Limited.

Collections are still ongoing and the competition will also be run next year for participating schools.

An estimated two million portable batteries are imported into Malta each year and are found in many indispensable devices including mobile phones, laptop computers and other equipment. 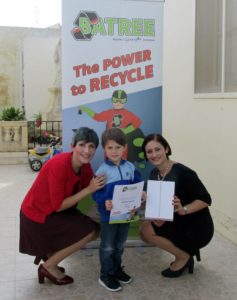 Recent figures published by Eurostat shows that Malta now collects 39 per cent of its batteries for recycling, inching closer to the EU-wide target of 45 per cent, but it is still behind the top collecting countries led by Belgium which retrieves 71 per cent.

By providing battery collection services, GreenPak is actively engaged in preventing huge amounts of batteries containing toxic and corrosive materials from being dumped together with other household waste. When batteries are not placed in the Batree bins, these could end up leaching chemicals into in the soil and eventually into the oceans.

At present, there are 500 collection points across Malta and Gozo and the bulk of the batteries are collected mainly by schools, outlets, and waste management facilities.