The University of Malta’s (UM) Department of Insurance within the Faculty of Economics, Management and Accountancy (FEMA) and Malta Insurance Association (MIA) have signed an agreement which sees MIA supporting the Department’s curricular activities over a two-year period. The agreement was signed by Rector, Professor Alfred Vella, on behalf of the University and by Mr Adrian J. Galea, Director General, Malta Insurance Association, in representation of the MIA. The MIA represents the interests of indigenous insurance companies and agencies of foreign principals. The sponsorship will allow the Department to continue providing Insurance courses, engage other academics from overseas and organise seminars.

Minister for Education and Employment, the Hon. Evarist Bartolo, who was present for the event said that the signing of such an agreement reflects the high standard Financial Services, and in particular Insurance Services, in Malta has attained over the years. As one of the main pillars, Insurance Services in Malta has grown exponentially and the demand for qualified, insurance specialists and practitioners continues to outstrip supply. Apart from career prospects offered by MIA’s members, Malta has also experienced significant growth in attracting foreign players who choose the Island as their operational hub of activity.
Speaking on behalf of the MIA, Mr Julian Mamo, President, remarked that the industry can only thrive and continue to grow if the industry supports the Department’s efforts and money is invested in the development of the much needed skills. Apart from the traditional careers one would normally associate with by following insurance studies, a qualification would certainly open up other avenues previously unheard of. The vast array of qualifications available offers students considering a career in insurance, the chance to specialise and progress further in an industry which is dynamic and prone to growth. 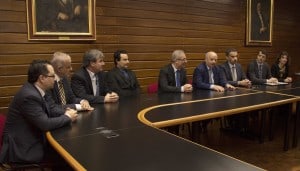 Professor Vella thanked the MIA and its members for its continued support of the Department of Insurance. The availability of such financial support was paramount to the success of this department, he said, and of the students who wished to embark on a career in Insurance, Risk Management and other related disciplines. The success gained by the Financial Services and Insurance industry in particular depended on the skills, knowledge and expertise gained through institutions such as the University of Malta. He concluded that it was thanks to such financial support that both University students and the industry could benefit from the knowledge, expertise and on-going professional development which were so necessary for career progression. http://www.um.edu.mt/fema/insurance