HSBC Bank Malta has announced the launch of an employee pension plan that has been developed in collaboration with the Malta Union of Bank Employees (MUBE).

Work on this initiative has been ongoing for the past year and the new plan will create an efficient way to save money for retirement.

HSBC Bank Malta Chief Executive Officer, Andrew Beane said: “HSBC has the well-being of its employees at heart, including their financial well-being. We are committed to support our colleagues with their financial future and believe this pension plan is an important new benefit that will help colleagues plan for tomorrow as well as today.” 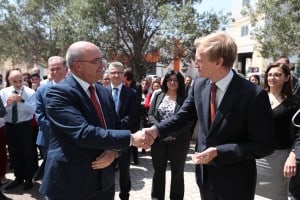 The plan involves contributions from employees that are matched by the bank while ensuring that overall levels of contributions agreed between HSBC and MUBE are achieved, and then invested through HSBC Life Assurance (Malta) Ltd, which could result in growth over the years. At retirement, employees can utilise the money available in their respective plan.

The pension plan was designed together with MUBE via a joint HSBC-MUBE working committee that has been actively meeting over the past months to make this initiative possible. HSBC Malta employees will receive more information on the pension plan through internal communications and roadshows held in branches and offices. In the bank’s recent townhall for all employees, a specific workshop was held on pensions and the changing demographics of developed societies.

“Being an employee representative organisation, we always believed it is important that MUBE supports employees not only when they are in employment but also when they retire. We are proud to have supported this first pension plan for HSBC Bank Malta employees and encourage many colleagues to get the information and benefit from this plan. MUBE also hopes to promote similar plans in organisations in which it is represented.” said William Portelli, President of the MUBE.