All customers who used their HSBC-issued credit cards for their shopping during the months of January and February and carried out a minimum of 10 transactions were automatically entered into a draw. 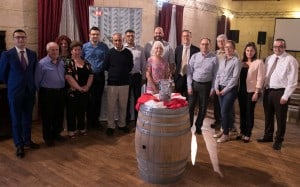 The prizes were presented by HSBC Malta’s Head of Retail Banking and Wealth Management, Daniel Robinson, following a competition held during the prize-giving ceremony. Mr Robinson said: “As we said at the start of 2018, this is going to be a fantastic year for HSBC Malta customers and we will continue to offer more exciting rewards to our customers as a token of our appreciation”.

In October last year, HSBC became the first major bank in Malta to roll out contactless card technology, bringing convenience to its Premier customers who can avoid inputting PIN numbers and utilising cash for small transactions.

Customers interested in learning more about these offers or seeking further information can visit hsbc.com.mt/start, call 2380 2380 or visit their nearest HSBC branch.