During an Extraordinary General Meeting held at the Westin Dragonara, GO p.l.c. shareholders approved a resolution to authorise the Board of Directors of the Company to sell a maximum of 49% of the ordinary issued share capital of BMIT Technologies plc at €0.49 per share which equates to a consideration of approximately €49 million GO p.l.c will, therefore, retain a majority shareholding in BMIT Technologies. 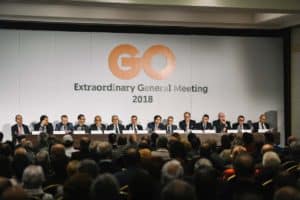 The company had announced its intention to undertake this initial public offering subject to shareholder approval a few months ago, explaining that the sale of the shares would generate liquidity that would, in turn, be applied to deliver returns to its shareholders and accelerate investments in the roll-out of GO’s fibre network.

Addressing the well-attended extraordinary general meeting were GO p.l.c. Chairman Mr Mohamed Fadhel Kraiem, CEO Nikhil Patil and BMIT CEO, Christian Sammut.  ‘Through our investment in the BMIT group, and the impressive range of data services that we offer, our intention is to reach a balance between growing this valuable business further, whilst at the same time generating healthy liquidity that promises solid returns to our shareholders whilst enabling BMIT Technologies to stand independently as a company and grow in its own right’ said Mr Kraiem. 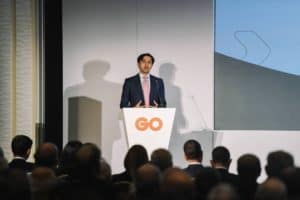 Mr Kraiem explained that on the back of a positive performance in previous years that allowed the company to pay out a record dividend of 13c per share (2017), now at the end of 2018 he felt confident that year-end targets will be reached and personally thanked all the leadership teams at GO for their dedication that has made GO a benchmark of excellence in Malta

The timelines for the upcoming share offer were announced to be:

More information can be found under the investors’ section at www.go.com.mt