You are here: Home » Business » Construction industry creates most wealth

The President of the Malta Developers Association, Sandro Chetcuti, today announced two significant statistics that have emerged from the independent research conducted by KPMG that is to be published shortly: the construction sector employs a minimum of 30,000 people both directly, indirectly or by induced effect. This sector grew at a phenomenal rate of 40% between 2011 and 2015.

Mr Chetcuti was addressing Nationalist Party leader Simon Busuttil and a number of candidates during which there was an exchange on the proposals the two sides agreed upon ahead of the June 3, 2017, general election. A similar meeting is planned with the Prime Minister this week. “These statistics truly show that, among the 18 industrial sectors in Malta, construction is the one that most creates wealth.” 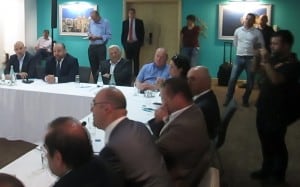 While stressing the professionalism and the quality of the projects undertaken by MDA members in all areas, Mr Chetcuti appealed for the policies of a new government to be always clear and without any moving of goalposts so as not to discourage investment. There should always be regular communication, including meetings with the Prime Minister of the day at least once a month, should the Nationalist Party be given a mandate to govern.
While Dr Busuttil accepted Mr Chetcuti’s appeal, he agreed with eight of the ten proposals set forward by the MDA. Dr Busuttil promised the following:

Lowering capital gains tax from 8% to 5% so that the development will reach the near to zero renewable energy targets set for 2020;
Removal of succession duty once and for all;
Removal of stamp duty for first time buyers permanently, including for those who are separating or divorcing;
Reform of the Land Registry Department;
For developers to be registered and licenced;
MDA representation on all boards related to the construction industry;
Exemption from stamp duty on those buying property in Gozo;
Fair compensation or aggressive incentives on scheduled properties and those of historical importance.

Mr Chetcuti continued to stress that incentives should always be aimed in helping individuals or end users and not developers directly. “We don’t want anything. Just leave us work. We are against all type of abuse, however one must keep in mind that all regulations and current policies should be respected.”
Among the MDA members present were representatives of the estate agents section within the MDA, Chris Grech (Dhalia Group), Michael Bonello and Douglas Salt. Mr Grech appealed to Dr Busuttil to appreciate the MDA’s contribution because it was highly instrumental in the growth in economic activity and the construction industry in the past four years.
Reacting to Mr Chetcuti’s intervention, Dr Busuttil invited the MDA, once the party receives the electorate’s trust, to send a list of the public boards it wished to serve on and to nominate the persons with integrity who wish to give their contribution. The Opposition Leader gave his undertaking that the PN was ready to consider them seriously.
He also promised to continue to strengthen the Property Malta Foundation, an entity that was recently formed by the government and the Association.