You are here: Home » Hot Topics » Teaching children how to connect again

I’m sure many parents are aware of studies which are showing a correlation between excessive screen time and the negative behaviour of children. According to psychologist Victoria L. Dunckley: “As a practitioner, I observe that many of the children I see suffer from sensory overload, lack of restorative sleep, and a hyper-aroused nervous system, regardless of diagnosis—what I call electronic screen syndrome. These children are impulsive, moody, and can’t pay attention…”

While we often hear of academic research which tells us obvious things we already know, when it comes to this particular area, we really need to take it seriously for the benefit of future generations. I don’t find it at all surprising that children are being so negatively affected by electronic screen syndrome. After all, even us adults are seeing our ability to relate and communicate with one another at a face-to-face, personal level deteriorating substantially. Don’t we all find ourselves sometimes so absorbed with our phones or other electronic devices that the whole world seems to be blocked out, and anyone who tries to interrupt us or get our attention is seen as a huge source of irritation? I know that sometimes I go down a wormhole of Internet and social media browsing, only to glance at the clock and realise that literally hours have gone by without my even realizing it. Now imagine children, whose sensory perceptions are still developing, doing the same, and one can better understand how the constant, unlimited use of such gadgets can seriously interfere with their cognitive development.

I do not think it is a coincidence that an over-exposure to screen time is also coinciding with an increase in the difficulty of getting through to students in class, coupled with a rise in anti-social behaviour. Parents and teachers are finding it more and more difficult to ‘control’ children and feel almost helpless in the face of a situation where they feel they have lost the ability to reel things back. “What can we do?” they shrug in resignation, as the dependance on tablets and mobiles increases, making it more difficult for them to wean their children away from them without risking an almighty tantrum. In fact, recent studies have compared addiction to screen time to what happens to the brain when one is addicted to cocaine.

The result is entire families which seem to be caught in a perpetual Catch 22, with each member moving further and further apart, unable to connect in real life, while (paradoxically) each is absorbed in the virtual world they are connected to on their own personal device.

In schools, teachers are constantly having to deal with impatient, distracted children who seem to show little empathy and compassion towards others, who resort to bullying and physical violence, acting out their frustrations and lashing out because they do not know how else to express them.

The need for children to communicate their feelings properly is essential if we are not going to have entire generations which are beset by depression, loneliness and an inability to resolve conflicts. It was therefore uplifting to learn about an NGO called Relationships are Forever foundation which has been set up by a couple named Julian and Joanne Sant Fournier, who have created the idea of Friendship Cards for children aged 6 – 15. As they point out in their literature, “Communication is now slowly decreasing to a point where children and adolescents have trouble even initiating a face-to-face conversation. These children are therefore developing an inability to share their feelings and are becoming emotionally illiterate.”

The cards are an interactive educational tool, which are ideal for children as it is like playing a game. They allow them to feel comfortable in expressing how they feel, talk to each other, and finding out what may have caused an argument. Because of the isolating nature of electronic screens, some children may have lost or never learned the basics of conflict resolution, which we all learned in childhood through playing actual games. These cards therefore can be very useful in teaching children how to avoid hurtful behaviour, and showing them that a conflict does not have to be permanent, and that it is possible to make up and be friends once again.

The Sant Fourniers have even developed a Youtube video to show how the Friendship Cards can be used, and since receiving a grant from the Social Impact Awards, they have started a training programme in the form of workshops for primary school teachers in order to introduce the cards in schools. It is a positive measure which is badly needed.

A healthy society is a caring, compassionate society, and unless we instill the importance of emotional intelligence in children from a young age, I sometimes fear we will end up in a world which is like something out of a Black Mirror episode, with microchips behind our ears, and a completely robotic existence where feelings and humane behaviour cease to matter. I don’t think we should give up and resign ourselves that there is “nothing we can do”; it is still not too late to ensure that today’s children are taught not just how to use the latest iPhone or iPad, but also how to cope with their own emotions while relating to others in a constructive way. 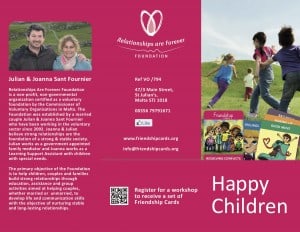